NAZRI CONTINUES TO "BUTTER UP" THE NON-MALAYS ! 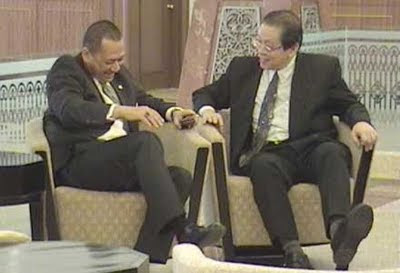 The Non- Supremacist & The Chauvanist ?

Datuk Seri Nazri Tan Sri Aziz was someone I used to look up to when I was in UMNO Youth having just returned from abroad and entering into mainstream politics after being an ordinary member for six years before that as a student. In fact, I was one of his most disappointed supporters when he declined to contest for the Youth Chief after having served in an acting capacity for a long spell. On the record, the position was his for the taking hands down but he opted to sit as a member of the Supreme Council instead, unable to be of much significance compared to his previous post. It seems now, that disappointing those who had much confidence in him has become an incurable disease which no longer can be described as a habit.
After being warned by the Prime Minister not to touch on the Biro Tata Negara (BTN) issue anymore, ruffling feathers among the hard-core Malay leaders while “holding hands and walking in the park” with Lim Kit Siang from the opposition DAP and Koh Tsu Koon from GERAKAN (Opposition in Residence), he has yet again held out his bare arms to embrace the non-Malays by hitting out at the so called non-existent Malay Supremacists, a term resurrected by the Chinese and Indian politicians from both divides of the aisle in Parliament to antagonize UMNO. It’s a good thing the MCA is currently having “intestinal” problems, otherwise they too would join in the fray.
Instead of cowering into submission on the spin by Malaysiakini in his interview smashing Malay Supremacy advocates, Nazri should have avoided it and in its stead attacked the advocates of “Malay Inferiority”, if he had an ounce of loyalty to his race at all. M Kulasegaran, the DAP National Vice Chairman who accused law abiding citizens of being racists, who lodged police reports against him instead of kicking the stool out of his curry backside, could have been a sitting duck if Nazri opted the use of reasonable intellect before shooting his mouth off.
Previous to this, Nazri ridiculed taxi drivers, the majority of whom are Malays and supporters of UMNO/BN, by comparing their taxis to public toilets. I pray that these drivers don’t look upon him as representing the UMNO party because he is merely an appointed, un-elected member in the Supreme Council.
Prime Minister Najib Razak seriously needs to wash Nazri’s mouth and keep it from continually barking lest we might lose whatever Malay support we have left while waiting to see the true outcome of 1Malaysia which at best remains a promise for now.
NB: Kepada Rakyat Berbangsa Melayu Dan Pemandu-Pemandu Teksi Yang Budiman. Assalamualaikum WBT. YB Datuk Seri Nazri Aziz Hanyalah Seorang Ahli Majlis Tertinggi Yang Telah Dilantik Diatas Ehsan Presiden Dan Bukannya Di Pilih Oleh Para Perwakilan UMNO. Dari Itu, Beliau Tidak Langsung Mewakili Pandangan Rasmi Parti UMNO Malaysia, Al-khususan UMNO Bahagian Pulai. Harap Maklum. Hidup Melayu! Salam 1Malaysia.
Posted by TPJ at 4:09 AM

TPJ, how you handle the enemy even in ur sleep... begins from how you see em... when ure awake, ofcourse! The more deluded you are in the way you see em... the more ineffective you will be in engaging.To see with enlightened eyes is to see what is, not what should be.I'm sure... in ur enlightened eyes... those 2... in the pics u've posted, r lower ... See Morethan parasitic pus!It's not national secret... that's general knowledge!Ofcourse, with ur xcellent background in human psychology...and politics 101...ure a "master" at this! "Masters" have no limit and they control the game because they know how it works. They know that the players are very much a part of the game environment as is everything else. There will be proficient players and poor players. A "master" knows he has to work with all kinds.
SO... get ur name in the new cabinet line-up! There r 6 more senators' seats vacant!

I'm afraid I regard the Malay chap on the left as a worse scum than his Chinese friend. I have more respect for the latter because his Chinese chauvanism is readily expected, but having a Malay leader suck up to him and his kind by running down defenders of his own race makes me sick to the core!

I thank you for your kind words at the end. Your brilliant analysis on the current situation prior to it was so good that I am almost convinced I deserve the nomination.

I hope you will continue to give more inputs on political issues in here for the benefit of the readers of The Patriot.

Thank you for your kind participation.

Sir,
At first, i was very surprised. I thought the one that wrote this article was one of the Minister in Najib's cabinet. The reason i say this because the language and fact that been quoted and use are very intellectual and interesting. Perhaps better than Najib's deputy and most minister!
Anyway, i have made some research and analysis regarding Nazri Aziz melodrama with Tun. From my 3 night research at the helm of one of the hill in KL, i think there is some anecdote in this confrontation. I am believe (based on my research) Nazri wont shout with this kind of mouth unless there is some signal from the top of Putrajaya. I believed this bro. Because some of my deep throat member in the cabinet told, there is already a lot of interference by Tun in the cabinet. Maybe this is the situation to pull over the speed coverage about Tun nowadays.
Nobody would accept this kind of misbehave, but Najib's didnt make any open statement at all. I wonder why.
Anyway Sir, your words has created thousand of reason why you should be in the cabinet. Please do forward your resume as soonest as possible. The MALAYSIAN be with you.
Instead of being an oil mafia, why not being a servant to the Malaysian. We had enough jokers in our cabinet! We need someone serious to be with Najib's morelikely someone from the congressmen of White House!

I thank you kindly for your confidence in me. As regards to Nazri, he is a loose cannon and one person who has a mouth too big for his own good. I trust Prime Minister Najib himself was caught unaware of this unnecessary outburst. I believe there is bad blood between Nazri and Dr Mahathir that is of a personal nature and shouldn’t be brought into the National political arena. Those who have been in Malaysian politics long enough know that Nazri is his own man and has been in confrontation with Mahathir at least once even while Mahathir was PM and he was the Acting Youth Head. So this hot head doesn’t care who is in power, he’ll speak his mind even if it is a small one making much damage.

Sir, Najib didn’t have to make an open statement reprimanding Nazri. It was sufficient for him to come out warning all quarters to shut up on the BTN issue meaning he is on the ball and the decision will be his and his alone. That is exquisite leadership on Najib’s part.

My bio-data has been on request for the third time running now. While I obliged the first two times, I think I will not waste my time presenting it yet again. If the Intelligence Agencies are intelligent enough and not oxymoronic in nature, they can just pull my file from their archives and get what they want there to present it to the PM instead of making me feel good for nothing. I’m all fired up, ready and proud to serve the nation under one God and Prime Minister Najib Razak, the most dynamic leader the country will ever see if he gets past the first term of office in one piece. The question is, will the leadership recognize good leadership and talent from the mass, and more importantly from within the circle? Time will tell.

Thank you for visiting The Patriot and please do provide more input in future. Your “ deep throat “ source is an asset. Information is power.

Salam Tg.Harun,
You are not fit to serve under Najib.Somebody commented earlier to post your resume to serve under Najib. Bro, you have outlived your era. It is time you go for the jugler vein. You must be in the front line.You don't have to serve under Najib or Muhydin or MUkriz. You are on your own. Go for it. State level or National level.Your tenure in UMNO speaks for itself. In Johore, everybody knows you. Go ahead and claim what is yours. You don't have to be beholden or subservient to those others who came to UMNO after you and have risen ahead of you.I honestly feel you are bigger than you think.