The High Council Of The Patriot Foundation Would Like To Wish All Muslims "Selamat Menyambut Awal Muharram, 1434H".

This Do'a Is To Be Read Three Times Nearing The End Of Asar Before The Call For Maghrib.

This Do'a Is To Be Read Three Times Right After The Call For Maghrib Before We Perform The Prayers.

May This Nation And Her Citizens Be Blessed With Peace And Prosperity In This Year Of The Hijrah 1434 And Beyond. Amin
Posted by TPJ at 3:57 PM No comments:

I am not one of the privileged bloggers who were exclusively invited by the director of the film “Tanda Putera”, Datin Paduka Shuhaimi Baba for a private viewing earlier this year, but I did view the trailer and know my history.

This topic has been unnecessarily deliberated upon on numerous occasions, gathering flack from all parties who’ve not even seen it! 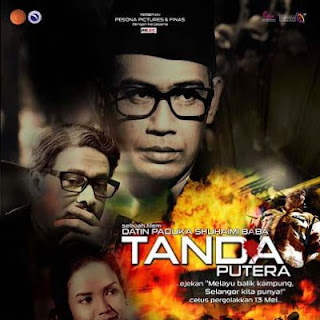 A Sign That It Is Too Close To The Truth. Are We Ashamed Or Afraid To Show it?

I think the Rakyat is anxious to see it regardless of race, religion and creed, but the politicians are the ones bitching about it. After watching it, citizens can then come to a conclusion and form their own opinion and it won’t be political.

This is about an important period in our history, which fundamentals cannot be altered. People will not decide to vote for or against a certain political party based on this movie. Trust me, those who won’t vote Barisan Nasional already had their skewed minds made up, even before the cast were picked and the scenes shot.

Indeed, this is a very sensitive issue but it showcases the exemplary leadership of two great men in our history and their decisions at the most crucial of times that carved and guaranteed the security and harmony of this great nation until today.

The onus is on the government to trust the faculties of the Rakyat upon viewing this movie. We are a matured nation of fifty-five years. By postponing the showing of Tanda Putera until after the elections, we are:

1. Fooling the Rakyat presuming that they are shallow enough to think that we care for their “sensitivities” when we’re ready to not give a damn on what they think after the elections if we show it then.

2. Exhibiting extreme cowardice, jumping in fear every time the opposition expresses outrage over an issue overturning clear decisions made earlier.

3. Telling the Rakyat that we don’t trust them to be mature enough to weigh the good from the bad that come out from this movie.

4. Bastardizing the valiant effort by Tun Abdul Razak and Tun Dr Ismail to save this nation from racial ruin, giving us the peace that we enjoy until today.

We Are Illegitimatizing Their Past Effort That Allows Us To Co-exist In Peace Today.

The Ministers who keep on making U-turns on decisions are making the Najib administration look no better than the flip-flopping leadership of his predecessor.

As have been written on several articles in The Patriot alone, the government needs to do extensive research and weigh the pros and cons on any decision before it is made which must then be irrevocable when it is announced and implemented. Anything less would mean that we have half-baked leaders who are followers, not decision makers.

Running this country is not about trial and error! Neither is it about being popular. It’s about preserving the well being of the people and the health of the economy asserting balanced authority at all times.

If screening this movie wasn’t a good idea, then it should not have been shot in the first place, or the announcement of its screening should be held until we were dead sure of the most opportune moment to have it screened unperturbed by hackles from the naysayers in parliament. That would then be the showing of a strong leadership!

It baffles me when the government can come to the aid of a traitor movie producer who reviled our National Anthem when he was a student but can stop a patriotic movie like Tanda Putera from being screened indefinitely. What kind of message are we sending to the young citizens of this country? “Vote for us but you don’t have to be a Patriot”? Is that it?

The High Council Of The Patriot Foundation Will Be On His Majesty’s Service Tonight Being Inspired Watching James Bond In The Service Of Her Majesty The Queen Of England.

This Movie Has Been Announced Much Earlier To Be Screened On The 1st Of November Worldwide, Watched By More Than A Hundred Million Viewers. It Cost Tens Of Millions Of Pounds To Shoot This Film And Will Be On Screen Without A Glitch, And On Time.

Malaysia On The Other Hand Can’t Even Decide When To Screen “Tanda Putera”, A Movie Costing Less A Million Pounds Worth To Be Watched By Not Even 5 Million Odd Viewers.

James Bond May Take His Concoction One Way And Not The Other, But In The True Spirit Of Tun Abdul Razak, His First Born Who Is The Current Prime Minister Of Malaysia Should Learn To Take His Fix Not Shaken Nor Stirred By Any Party When Serving It To The Rakyat!
Posted by TPJ at 9:41 PM 2 comments: