IN A BREACH OF SOVEREIGNTY, MALAYSIAN HOSPITALITY IS NOT AN OPTION!!! 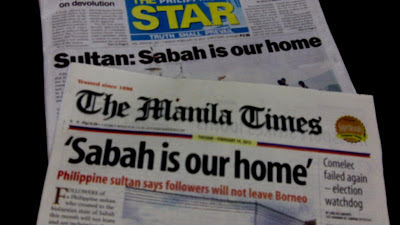 If It Drags On, More Of Them Will Start Believing It's True

There must a dummy guide that deals with a situation that violates our Nation’s sovereignty.  I’m sure we’ve had more than enough joint border exercises to know what the standard protocol would be under these circumstances unless they were busy sitting around open fires and smoking weed in the jungle during the maneuvers.

These criminal trespassers in the form of the Royal Sulu Army didn’t come to our shores in their hoola shirts and bermuda shorts for a holiday. They came with hostile intentions militarily well equipped and have occupied our soil claiming it to be theirs for almost a week. This is not a situation where we welcome them with cocktails and garlands.

Whether the general elections are around the corner or not, we have to send a strong message to the irresponsible citizens of our neighboring countries. Our borders have been seriously violated. It is expected that our responsible friends in Manila would understand that appropriate and swift action must be taken under hostile situations, as we appreciate that if our nationals break their laws, they would have to be persecuted accordingly as well.

It is time now to engage these criminals as according to reports, they are on a “do or die mission”. From another source, their Sultan have asked them to “stay put until the Sabah claims were discussed but to avoid violence.” How can the unit avoid violence when it is fully equipped with arms and munitions while maintaining a hostile stand?

I’m sure by this time, effort is made to meet with the Sultan for a peaceful outcome. If we leave it with our counterparts and not meet His Highness ourselves, common sense will prove that it will be futile. 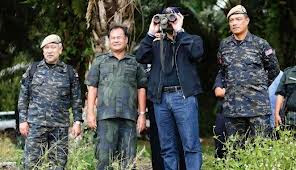 If they fail to surrender to be deported back to their original port of embarkation, these are the courses of action to be taken.

In any warfare unless napalm or centralized cluster bombs are used, there will be prisoners taken upon surrendering. Out of goodwill to Manila, they can be deported but not before stringent interrogations have been concluded to seek the source of their initiative.

There is a strong rumour that a local traitor of strong influence (no prizes for the right guess) had a hand in instigating their Sultan to this end by invitation. We have clear evidence that at least one such person is fond of dragging foreigners into our affairs. Are we even using our intelligence agencies effectively? Why are his movements not tracked down and reported?

Essentially, when we have achieved to neutralize them either through peaceful measures or otherwise, the Sultan might be persuaded to divulge the real reason behind His Highness’ reckless action, after which, the perpetrator/s must be charged under treason and face the ultimate penalty.

The General in charge of our forces patrolling the borders in Sabah must be hauled up and taken to task for allowing this breach to happen without warning. It looks like the police have to do their jobs because the army failed to do theirs. Everyone is passing the buck to the other. First the Army hands it over to the police. Then the Home Minister lets the Foreign Minister decide on how long before national security is restored. All this is because we didn't nip it in the bud! The standard protocol was NOT observed!

Our defense forces must be on alert at all times even during peace.  Even at DEFCON level 4 or 5, there should be a constant intelligence watch and security measures observed. And if there are constraints in the budget, then the Finance Minister might have to review this after the BN Government is returned this year by the choice of the people and with the Will of God.

Instead Of Guarding Football Stadiums During Matches With Unarmed Citizens, Perhaps The Special Forces Can Be Put To Good Use Now That Our Sovereign Territory Is Invaded By Armed Aliens.

The Rakyat Of Malaysia Will Not Penalize The Government For Doing Their Job In Maintaining The Security Of Our Nation And Defending Our Sovereignty. We Have Shown Goodwill, And We Have Given Respect To The Relevant Parties. Now It Is Time To Act Responsibly In Accordance To What We Were Voted In For, Which Is To Protect Our Citizens And Our Soil From Further Violation.

We Must Do What Is Right For Our Country, Then Put Our Trust On The Rakyat To Duly Punish The Traitor And Those Guilty By Association Who Invited This Anarchy And Disorder In The Humble State Of Sabah.

Only Then, Will The Rakyat In Turn, Put Their Faith In Our Great Leadership.

NB: The Governor Of Bank Negara Must Also Be Cautioned To Monitor Sudden Influxes Of Funds From Abroad At This Time. They May Qualify On Paper But May Not Be Employed For The Purpose Documented But To Buy People During This Season. Recent History Has Proven With Much Clarity, That There’s A Price Tag To Everything.
Posted by TPJ at 6:26 PM No comments:

On January 31, I Was Awarded With The “Fellow Of Oxcell” From The Oxford Centre For Excellence And Leadership, United Kingdom.

I Received The Award From His Worship The Lord Mayor Of Oxford At The Town Hall In St Aldate's, And Was Scheduled To Deliver A Speech At A Reception Later To The Malaysian Students At The Royal Overseas League In London. Unfortunately Due To Some Circumstances Unanticipated, The Latter Could Not Take Place.

I Have However Recorded The Speech Here For The Benefit Of Our Students Who Were Looking Forward To It In The UK. Perhaps I Might Have The Privilege Yet At Another Time More Convenient For All Parties Concerned.