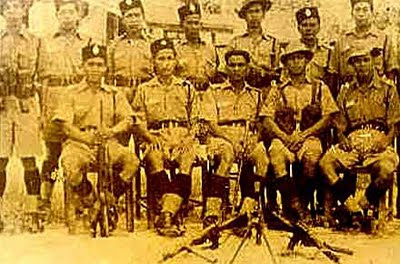 The fallen heroes of Bukit Kepong. They showed true grit and magnificent valor to the very end. Let them not die in vain.
Today marks 20 years after the signed agreement of a permanent truce between the Government of Malaysia and the Communist Party of Malaya.
On record, according to The Haadyai Agreement the former “Butcher of Malaya“ probably should be allowed entry into Malaysia in accordance with the law of the land. However, the law in Malaysia as in any other country provides for the safety, peace and security as well as the wellbeing of its citizens. In retrospect, allowing the former terrorist head to return after a long absence would bring excruciatingly painful memories to the Patriots who’ve lost their comrades and loved ones to the hands of the “ Commies “ under his charge. It would have been different had the murderer sought his return almost immediately after the signed agreement like his other comrades instead of opting to live in Thailand. Deciding to return now would not only breach section 5.10 of the Administrative Arrangement persuant to the Agreement which states that “ There shall be no publicity of their entry into MALAYSIA “ , it will also burn the blood of true Patriots and the family of the fallen victims. In addition, if he were to be assassinated upon touching the soil of the Malaysian Peninsula by a severely emotionally affected Nationalist, the Government of Malaysia will be accountable in the eyes of the world, and the opposition including several Malay traitors among them will definitely travel the world with it as opposed to “going to town” on matters of a smaller magnitude.
As I usually limit the length of an argument in my articles to maintain my readers’ attention, I’ve decided to extract one item from the Administrative Arrangement as below to ponder over.
Administrative Arrangement Between The Government Of Malaysia And The Communist Party Of Malaya Pursuant To The Agreement To Terminate Hostilities.
ITEM 7 - PARTICIPATION IN POLITICAL ACTIVITIES
7.1 Members of the CPM and members of its disbanded armed units who are Malaysian citizens are free to participate in political activities including the formation of a political party or parties within the confines of the Federal Constitution and the laws of MALAYSIA.
7.2 The Malaysian authorities shall expeditiously consider any application that may be submitted by them for the registration of any political party in accordance with the due process of the law and upon registration such party shall be accorded the same status as any other legally registered political parties.
Source: Clare Street: James Wong Wing-On Online. The Haadyai Peace Accord (Part 2).
This item 7 above does not prohibit the former chief terrorist from entering into politics in whatever capacity nor does it prevent a Chinese chauvinistic political party from luring him in and turning him into an idol for members and rookies to pay homage to, therein incurring the wrath of the Malays while the “innocent“ Indians stand by enjoying the view from the grandstands. We should also not be surprised if there are members of component parties within the BN Coalition joining in the chorus in the “butcher’s“ defense. Though I pray hard that all the good work done by the current administration in forging a strong integration of cultures and social tolerance will continue to bear fruit under 1Malaysia, we cannot dismiss the possibilities beyond a reasonable doubt.
Tan Sri Rahim Mohd Noor, one of the signatories of the arrangement and an advocate of the murderer’s return albeit for a brief visit, of all people should comprehend what it is like to lose one’s sanity in a fit of a rage. If he multiplies that to the possible thousands of discontented provoked citizens, there will certainly be blood on the streets.
Chin Peng has been a “sleeping dog“ for a long time. It would do 1Malaysia good to just let him die in his sleep, where he now lays.
Posted by TPJ at 1:56 AM

1malaysia is a 1Liar

The BN already lost support from the non Malays and malay traitors.

Admit chin peng, they will lose the support of loyal malays and especially umno supporters.

Perhaps thats one of the opponents strategy.

Damn. When can we see true patriots among the politicians?.

Give it time. It's too early to judge though the initial signs seem positive.

Thank you for taking the time to visit The Patriot.

POTS is another product of opposition brainwashing who will oppose anything which has anything to do with Malays. His website says it all. Classic opposition supporters who says the Malay are racist but they themselves are one, and even worse. His type and most of his posts are exactly why BTN is needed by primarily the Malays. From his website, it looks like he is a doctor serving the people in Sabah.

BN should be careful with Sabah. Lots of ideas and brainwashing going on underground among the professionals and the nons. Sentiments like against Semenanjung are being used to gain the supports. The opposition is using its classic rebellious ala French revolution strategy to topple down the government.

Again, this products like POTS are the results of the subtle Malay government treatment towards the non Malays since independence. Its not like we need assimilation. But, being humans, they will always want more.

As you said in your previous post - even Jackie Chan said the Chinese needs to be controlled.