CALL FOR ANTI "HYPOCRISY" LAW INSTEAD

1. A DAP lawmaker suggested that an anti discrimination law be introduced in the face of the "Muslims Only" launderette debacle.

2. She can do one better by introducing an anti hypocrisy act instead under which a few are already in clear violation of today.

3. It looks like Islamaphobia is creeping onto the very soil where Islam is considered the religion of the federation. People need to know the difference between race and religion. There is a clear distinction.

4. When an entrepreneur opens a unique business that can clear the conscience of his Muslim consumers, that is pertaining to religion even if it is not an edict.

5. That is his choice if we are to promote free enterprise in this country,  just like pubs and bars are permitted in a predominantly middle class Malay Muslim area like Taman Tun Dr Ismail.

6. But when a company makes it a mandatory condition for job applicants to be well versed in Mandarin/ Chinese to qualify for jobs in a State where it is neither the first nor the second language of the mass, it is considered RACIAL and the proprietor can without reservation be called RACISTS. 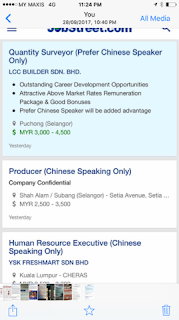 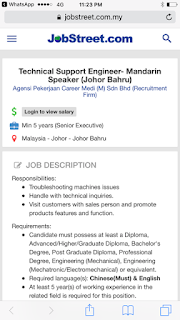 8. It is generally discriminatory when you don't support something that is good for the conscience of Muslims but support or remain quiet on anything that is for the benefit of a certain rising minority. In fact I wouldn't call that discriminatory,  it should fall under the category of blatant daylight hypocrisy!

9. So I suggest the DAP representative not drag the good name of His Majesty the Sultan of Johor when certain topics serve their interests but remain quiet when His Majesty addressed the issue of a one school system for all.

10. Celebrate That Too Lest You Be The First To Suffer The Brunt  Of The Very Law That You So Wish To Introduce.
Posted by TPJ at 12:26 AM No comments: