ACID TEST FOR HIS MAJESTY AND HIS BROTHER RULERS 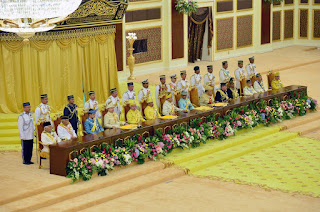 1. The Yang DiPertuan Agong is said to be meeting leaders beginning on Wednesday to hear their opinions on the current situation facing our country.

2. According to media reports, later this month, an Emergency Rulers’ Conference will convene.

3. This has arisen because in the last few months after the “Darurat” was announced, the situation had worsened with the Rakyat having to endure the “mismanagement”, flip-flopping and misunderstandings between members of the administration in policy.

4. In addition, anger has crossed beyond strict boundaries where Malaysians have started to criticise the King for the “failure” of the “Darurat” to meet its original objective, except perhaps to help the current administration hold on to its power. That has become the general perception.

5. Since then, while the government was incurring the wrath of the people, many started looking to the Institution for remedy and sought for democracy to take its course returning it to the people. The pressure is mounting.

6. This doesn’t mean that there should be a general election in the near future but perhaps the lifting of the “Emergency Ordinance” with Parliament sitting again having the voices of the people heard in the right forum and with proper representation.

7. If the Rulers are responsible enough to meet and discuss the State of the Nation vis a vis the Covid 19, then this is a strong signal that will compel the government to call for Parliament as well to convene.

8. A second option is to find a solution within the Perikatan Nasional government whereby there is a change in the cabinet right up to the top, perhaps with the “repositioning” of Tan Sri Muhyiddin Yassin from Prime Minister and the removal of “non essential” ministers in the Cabinet. Maintaining 70 ministers and deputies is preposterous at this juncture. This is a precedent set in Japan  where a former Prime Minister sits as member of the cabinet in a reshuffle.

9. The third option is forming a unity government, replacing the whole cabinet including a couple of current essentially good ministers. The new ones will take months to fit in at a moment when time is of crucial importance.

10. The people are frustrated with the current politicians managing the conditions of the nation, and its recovery which is conducted in a manner which appears to be of trial and error.

11. Today, let me not mince my words and state the obvious that the Malays form the large majority of the Rakyat that are still loyal to the Institution of the Monarchy.  It is however dwindling by the day especialy in urban districts in view of the current events and open forums.

12. What the Palace decides in the days to come will determine the level of respect they can command later from their subjects.

13. The Rulers’ Council and the Yang DiPertuan Agong are their very last resort.

14. I fear that if the status quo remains and the “Darurat” is extended beyond August, then the credibility of the Royal Institution will be severely tarnished with suspicions of it being compromised.

15. It will be difficult then to find loyalty and compassion from the people.

16. If it arrives to that end, despite our duty and solemn oath to uphold the Rukun Negara, what is in the Constitution too, as regards to the Institution, will be hard pressed to defend for any generation after this.

17. Let us hope that the agenda to be discussed in the conference has been dispatched well in advance to the Royal Houses in their respective States so that their Royal Highnesses and Majesties can prepare well before arriving at the Capital for the sole benefit of their subjects and this loving Country.