DONUTS AND COFFEE AT THE HOME OFFICE?

The Home Ministry seems to be enjoying the company of editors from The Star, and they keep on coming back for more visits. It has become almost a habit that I’m beginning to think that the Home Minister himself is serving them donuts and coffee over laughs and a mild apology after ridiculing Islam like the last time.

Last Ramadhan, the fasting month in the Muslim calendar, editors from the same newspaper were invited to the Ministry to explain their insensitivities towards the Muslim community and the official religion in this country by promoting Pork Ribs while also writing on the breaking of fast in their special supplement on the same day.

After being “cordially invited” to the Ministry at the pleasure of the Minister himself, the Star left with just a soft tap on the wrist with an official apology from them the next day.

A few days ago the same newspaper stretched its luck even further by provoking Muslims in this country by publishing a full page picture of a visiting entertainer with “Allah” inscribed on her bare bosom bordering SEDITION!

While Information Minister Datuk Seri Utama Dr Rais Yatim, took the bull by the horn and banned the concert performing his duty under the jurisdiction of his Ministry, Home Minister and “accidental” Vice President of UMNO which supposedly upholds the struggle of “ Agama, Bangsa dan Negara” Dato’ Sri Hishammuddin Hussein preferred to leave it to his MCA Deputy Minister to handle the issue pertaining to the serious insult on Islam. 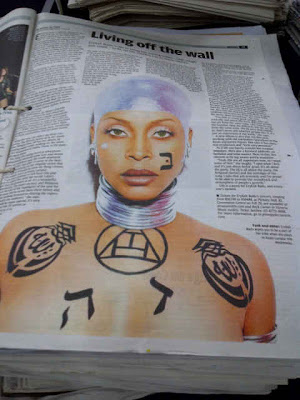 Picture Test: If This Doesn’t Burn Your Blood To A Boil, You Are Not Muslim Enough!

Apparently, the Home Ministry has issued a show cause letter and given The Star a week to respond. A show cause letter is usually an avenue to allow the perpetrators to go scot free if they are good at constructing a reasonable excuse.

In the meantime, I’m sure the ministry will refer this to the Cabinet to decide because the Minister in my view prefers to hide in the “closet” and NOT take a stand.

FACTS AND ANALYSIS OF THE SITUATION:

* Sedition is defined in the Colin’s English Dictionary as:  A) speech or behaviour directed against the peace of a state.  B) An incitement to public disorder.

* In August 2011, The Star promoted “Pork Ribs” on the same day they ran a special supplement on breaking fast in the month of Ramadhan.

* In December 2011, MCA owned The Star allowed an article by their royal “stooge” writer to call UMNO members attending the General Assembly at PWTC leeches.

* In 27 February 2012, The Star published a full-paged picture provoking Muslims. (The picture above explains itself)

* Deputy Home Minister Lee Chee Leong who was asked to handle this, is a MCA Central Committee member.

* Michael Chong (Chairman of MCA’s complaints bureau) was appointed as Special Officer/ Advisor to the Home Minister in 2009.

* The action on The Star might be referred to the Cabinet.

* The Cabinet has 4 MCA Ministers.

*Apologies kept pouring in one after the other for their writers’ mistakes without one stern action being taken against them in the past.

QUESTIONS TO PONDER OVER.

* Is MCA a team player in the Barisan Nasional (BN) coalition?

* While the Chinese community are rejecting this party but are warming up to Prime Minister Najib himself, is this not sabotaging Barisan Nasional’s chances by hurting the feelings of the voting Muslims who usually support MCA because of BN?

* Would it not be biased for the MCA committee member as Deputy Home Minister to be involved at all in the issue at hand?

* Will the MCA Ministers be rightfully asked to recuse themselves from participating in the meeting to avoid being biased in discussing the action on the paper that their party owns if it reaches the Cabinet for execution?

* Are the concert organisers Malaysian, and did they provide the picture without considering its sensitivies?

* Why did they go ahead with providing these pictures?

* If the organisers didn’t send that particular picture, the authorities might have allowed the concert to continue not knowing of the tattoo.

* Did we do enough research on the singer before we approved the concert in the first place?

* Can the fans sue the organisers and The Star because their actions caused the concert to be cancelled?

This Is Not The First Time That The Star Has Hurt The Feelings Of The Muslims. No Show Cause Letter Should Be Issued This Time. They Must Be Dealt With Sternly And With Clinical Precision Without Hishammuddin Pushing The Envelope Up To The Cabinet. The Local Organisers Too Should Be Taken To Task For Being Imbeciles Neglecting The Fundamentals That Keep The Very Fabric Of Our Society In Tact. This Is Not About Race But Will Be Seen As Such Because The Paper Is Owned By The MCA Which Is Insulting Islam. This Is About An Individual And The Establishment That Allows The Individual To Be Reckless Jeopardizing Racial Harmony And National Security.

Hats Off To Yb Datuk Seri Utama Dr Rais Yatim On His Righteous Decision Without Fear Or Favour.

Where Are The Muftis And Minister Of Religious Affairs In This Matter? Are They More Interested In Fighting Among Themselves On The Facets Of Our Religion Rather Than Defending Islam When It Is Clearly Attacked By Infidels?

The Entertainer’s Fans’ Wrath Should Not Be Directed At The Government Who Had No Qualms In Approving The Concert In The Beginning. It Should Be Duly Directed At The Organisers And The Star For Causing It To Be Cancelled Due To Their Negligence In The Basic Foundation That Holds Us All Together As One Harmonious Multiracial Nation.

The Home Minister Should Take Any Action Necessary According To The Provisions Under His Jurisdiction Without Sidestepping Or Prancing Around The Issue In His Ballet Slippers While Others Arrogantly Tap Dance In The Faces Of Muslims And Islam.  If The Action Is Done In Good Faith And Righteously According To One’s Official Responsibility In The Interest Of National Harmony, No Matter How Risky It Might Look, The Mature Rakyat Will Ensure That This Principled Government Will Be Retained In The Next General Election.

Most Of All, It Will Have The Blessings Of Our God The Al-Mighty.
Posted by TPJ at 5:20 PM 26 comments: 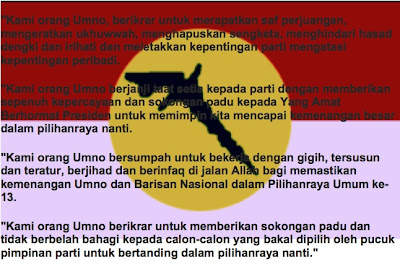 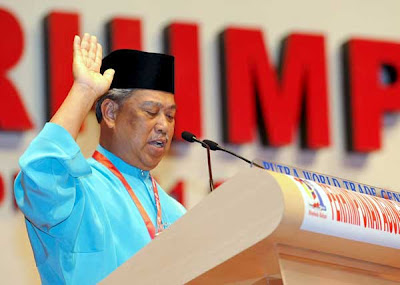 I Suggest If The General Election Is Further Postponed To Either The End Of The First Half Or Early In The Third Quarter Of The Year, Then We Should Use The UMNO Anniversary As A Forum To Renew Our Oath And Raise Again The United Spirit To Pummel Through Our Course To Imminent Victory.
Posted by TPJ at 2:43 AM No comments: