IS NAZRI WIMPING OUT TO THE OPPOSITION? 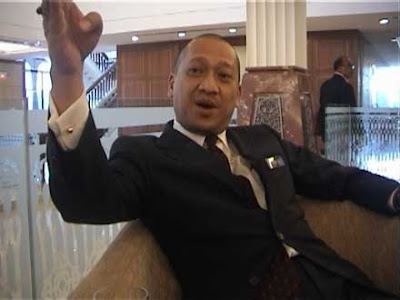 A miserably failed product of the BTN?

Being a minister who prefers not to contest in UMNO elections while remaining safe as a Cabinet member and being continuously re-appointed to the Supreme Council may describe the character of a gutless Malay leader.
That is probably why most of us are not surprised with the “humility“ shown by Nazri Aziz bowing to opposition pressure and hiding behind a Cabinet decision that could very well score points for the opposing side.
Most Malaysians are wondering why only after the expose by the opposition leaders, some of whom should be equally crucified because of their participation in the running of the Biro Tata Negara (BTN) when they were in the government, were steps taken to revamp the establishment. If indeed it is a racial thing, then where were Nazri and his conscience before this? Was he representing the Malaysian Cabinet on another planet altogether while all this was going on? Reading from his outrageous statements condemning the Malay Press as well as former Prime Minister Mahathir Mohamed, he is implying that since it is now in the open, we should no longer lie to the public. The question is, was it alright to lie to the public as long as it was kept under wraps? He confessed that he too attended this course. Evidently the BTN had failed disastrously in training him to respond in an acceptable and intelligent fashion befitting a Minister in the Malaysian Government. Yes ladies and gentlemen, it is certainly NOT a lie that he dresses better than he thinks and talks. This is also proof that the BTN is not perfect, hence the need to improve it, but certainly not revamped.
1Malaysia was established even before its creator and the current Prime Minister took his oath of office and if it was indeed the reason for the revamp of the BTN, it could have been announced much earlier this year instead of after the opposition made a move on it.
I am a product of the BTN (a tool to strengthen Patriotism amongst Malaysians primarily the Malays), as are many of my friends and we get along very well with other races in this country but will be the first on the frontlines if ever our rights as enshrined in the Constitution are breached. May the curse of our forefathers be upon those who consider this being racists, and triple-fold on Malay traitors (well dressed or otherwise).
The BTN syllabus should be explained to the public unapologetically and we should stand firm by it. In that respect, all parties will act with propriety in the station that they are placed in on Malaysian soil. It is mostly confined to government bodies which comprise mainly of the Malay race. It should be of no concern to the fake Patriots who question its existence while standing by to flee the country when the going gets tough.
Posted by TPJ at 2:20 AM

Salam Tengku
The minister concerned should reply to the questions you raised in here.

This could be another tactic in a series to topple the effective government.

During Paklah era the opposition were not too ferocious in their attacks.

The opposition had all along questioned and challenge the NEP, ISA, Social Contract. They brought out multilingual signboards, the azan, the Malay girl ketok ketampi, the chin peng butcher's return ...

Therefore BTN is just another issue in this planned series.

Thank you for the tip. We too want to be as sharp as Tun in our age let alone in 35 years time.

He is truly an inspiration.

This particular Minister has a tendency to allow his emotions to act without the benefit of intelect. If his answers here will be as pathetic as his attempt during his open statement to the press on matters of the same, it would be futile.

Perhaps the press might quote several blogs carrying this story. It would be fun to see him crawl up the wall.

Bro, Nazri has said nothing befitting a full minister.He was among the first to kiss Mahathir everytime Mahathir returns home from overseas trips.He was never critical of Mahathir's administration. During Pak Lah's tenure, he became vocal and critical of Mahathir.Musa Hitam or Tengku Li were never this bold. I do wonder how he gets into the UMNO Supreme Council and the Cabinet every season !

The burden to maintain racial harmony and improve national unity seems to lie upon ONE community only. Because this 20-yr-old program emphasizes on the facts and history of TANAH MELAYU it is now labelled racist and a stumbling block to better race relations? Deny the factual, dilute the legitimate history, then we'll achieve Nazri's version of 1M'sia dream.

To what extend do we have to tolerate, dilute and accomodate in the name of national unity. Stop finding faults and trying to 'rebrand' every existing program there is for the malays. Instead of REVAMP, CREATE a similar program for the other communities. The foundation of patriotism must be supported by all malaysians.

Nazri will bank on his relationship as Najib's deputy in the Youth Wing to remain in the Cabinet and Supreme Council.
He should watch his step however because Najib is not one that will carry a liability for too long leading to a loss.

Brilliant idea. While they keep on demanding for the end of programs that will benefit the Malays foster better ties between all races, they don't have one that will promote the same.

Trust me on this. They definitely have one in private, but unlike some Malays from both aisles, they are not stupid to yell it out to the whole world.

If we have similar programs for them, they would not attend them because we can only impose mandatory attendance on govt servants. How many of them even apply to serve the govt?

...not only govt servants. Impose to those attending national service (Program Latihan Khidmat Negara) and orientation sessions prior to colleges and university enrollments.
-datswhy-

Another brilliant suggestion from you. Those on scholarships locally are in the program i think but am sure that those who are enrolled abroad don't. Perhaps if the Petronas scholars went through this, they wouldn't be arrogant and act like they are God's gift to the Malays race.

Keep it coming and thank you.