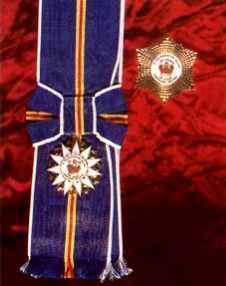 As I read the recent expose on the attempted bribery to secure the honorific title of "Tan Sri", I asked myself how one can have the gall to approach HRH The Sultan of Johor and make the offer. What drove him to it and what made him feel comfortable enough to do it? Well the buck had to stop somewhere, and this particular "Tan Sri" dialled the wrong number.

The purchase and sale of honorific titles from states have been widely known as an "open secret". I offer no prizes for the right answer to one most notorious in that respect.

But until recently there was nothing in the air to suggest that federal titles too were being compromised.

It is interesting to observe the revelations by the accused "Tan Sri" who in recent years have allegedly procured and profited from the sales and purchases of these titles.

Yes, it has also been revealed that he was paid a lot more than he offered to the recommender of such titles perhaps irking the latter even more after its discovery.

Honorific titles should be reserved for those who have served the country with honours and not sold to high bidders.

Many have died and were maimed in the line of duty to defend this country and have medals less befitting of their deeds pinned on their coffins. It therefore disgusts me to think that these non deserving characters who perhaps would be the first to flee the country in desperate times can flaunt their chested medals just by corrupting royalty.

The people deserve to know who have succeeded in securing the titles for money and which of the culprit or royal household is responsible for this gross miscarriage of the country's highest honours.

Those Who Have Been Proven To Be Guilty Of Buying The Titles Should Henceforth Be Stripped Of Them With Immediate Effect While The Royal Recommender Or Receiver Of The Bribe Should Be Revealed.

The Persons May Have Immunity From Conviction Or Be Granted A Pardon. But The People Must See Them For Who They Really Are.

The Country's Honours Must Never Be Put To The Bid Lest It Will Diminish The Very Dignity Of Our "Negaraku Initiative". 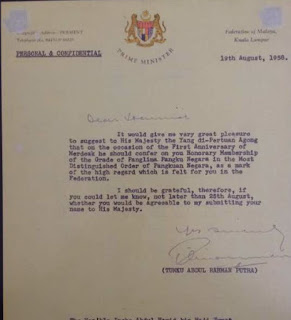 Esteemed Recognition And How It Was Done Then 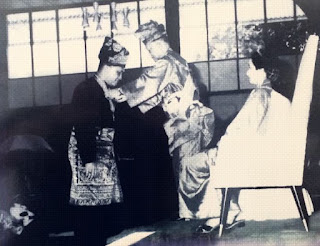 My Late Father Receiving The P.M.N. From His Majesty The First Yang DiPertuan Agong

While The "Panglima Mangku Negara" (PMN) Has A limit Of 75, The Second Order In This Rank, The "Panglima Setia Mahkota" (PSM) Which Also Carries The Title "Tan Sri" Has A Limit Of 450 Honourable Holders At Any One Time.

Last Year Alone, 52 Recipients Were Bestowed With This Order.