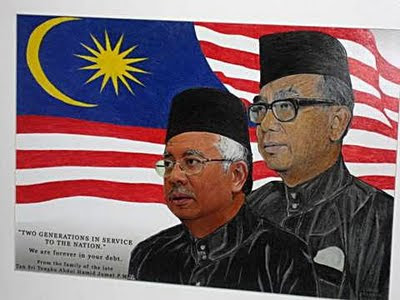 Breathing very deeply and slowly trying to fend off a possible cardiac arrest, I sat on my TV chair not long ago in disbelief when I first heard Tun Abdullah Ahmad Badawi, the former Prime Minister of Malaysia announce that while Dato’ Sri Najib was Tun Razak’s biological son, he was Razak’s “ political son”. This could be an honour for the dead if the person who said it was superb in the chosen field of his profession but if he brought disrepute and chaos not to mention the suttle threats of mutiny within his charges, then attaching himself to a former great might make the latter spin in his grave.
The previous Prime Minister was out of touch and unable to make solid and crisp decisions on the matters of the State primarily in respect of national security leading to one demonstration after another. Then there was the infamous memorandum presented by the 11 non-Malay Ministers to him, and of course, the embarrassing episode of sending a Malaysian emissary apologizing to the Chinese Government for the mistreatment of a MALAY citizen in a MALAYSIAN prison. I’d still be here typing till Christmas if I had to include the rest of the questionable decisions made by the man. Having said that, and thanking him for his flash of wisdom to retire earlier than expected, we are fortunate to have a man in the Prime Minister’s office today who is “ all hands on deck “ as far as running the government is concerned. For instance, though he respects the rights of every party within the ruling government, he will eventually intervene when a problem within that party sees no end in the near future and threatens the wellbeing of the Barisan Nasional Government. Either natural or induced, there will be closure in the MCA after Najib returns from his trip abroad on 1 December. We can bank on this.
The best indicator of his seriousness in seeing a difference in the running of the Country can be seen through his introduction of the Key Performance Index to six national key results areas (NKRA) which “ will help streamline all procedures and pool all resources in an organization, which efforts will be focused on achieving the targets in a reasonable period of time ”. The NKRA among others will focus on reducing the crime rate, providing affordable education for all, better infrastructure in the rural and remote areas, and improving public transport in the medium term. He appointed 6 ministers to lead the key areas and will meet weekly to see their progress. The other ministers themselves will be responsible for the KPIs of their respective Ministries which will be evaluated by Najib himself in every six months. He also appointed Idris Jala as Minister in the Prime Minister’s Department and Chief Executive Officer of the Performance Management and Delivery Unit. If Tan Sri Koh Tsu Koon will have problems in evaluating his own colleagues and their Ministries, the no-nonsense Idris will have no qualms about calling a spade, a spade, and this will help Dato Sri Najib to execute his duties on those who fail to execute theirs.
It is evident that with these appointments and responsibilities being formulated, Prime Minister Najib Razak means business in his Government and will not take half-hearted efforts lightly. There is already talk that a Cabinet reshuffle is in sight and if every evaluation takes six months, the first phase will complete its cycle on the 27th January 2010. The evaluation will not be stood hostage by race represented parties demanding that their Ministers be saved. Only their job performance can save their backsides then. This includes UMNO Ministers as well, for God knows there is no drought in talent and capability amongst its members. I wish the ministers good luck.

Tun Abdul Razak, the country’s second Prime Minister was a great thinker who was able to translate his ideas into developmental projects for the infant State of Malaysia then. He knew he was running against time when he led the government and tried to do as much as he could before his demise. Today, his son Najib is just as committed in seeing success materialize in this great nation, perhaps with even greater determination then his late father. He is very composed and thinks thoroughly before making decisions with clinical precision. Today, slightly a month after his second 100 days in the Prime Minister’s office, I stand witness without the slightest doubt, nor with any reservation, that Najib IS Razak’s son on both counts; biological as well as political. Let no lesser man take that away from him ever again.
May Allah Bless The Soul Of Tun Haji Abdul Razak Bin Hussein, And May He Be Placed Amongst The Righteous. Al-Fatihah.
Posted by TPJ at 11:48 PM 8 comments: