HUMBLE TIPS FOR THE POTUS FOR DEBATE # 2 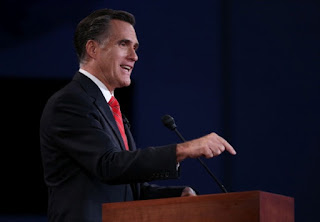 Energized And Hungry To Win 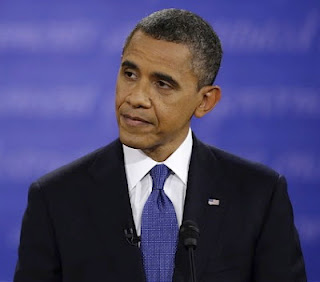 Looks Tired With No Appetite

All Things Being Equal In Arguments On Government Policies, The Sitting President Of The United States Of America (POTUS) Should:


1. Retire his image consultant.  If he wants to retain the Presidency, the least he should do in a debate is look more Presidential than his opponent.

2.  Drop the tie he wore on Debate 1.
a)  He should be wearing a tie reflecting one of the colors on the American flag. The dark blue field upon which the 50 stars rest on in the flag would have been a more appropriate color and exhibits firmness.

b)   A light blue tie like the one worn would have been appropriate if he was running for re-election as Secretary General of The United Nations.

3. Lose that limp on his walk making him look like he was coming out of a basketball court at half time in the Bronx.

4.   Never nod in agreement when his opponent is listing his shortcomings.


5. Be more aggressive instead of back-paddling and being defensive.

6. Capitalize on his history in service as a community worker thinking of the welfare of the mass as opposed to the corporate fellow who strives on profits on the backs of others.

7. Remember that he is stacked against a popular pair in Romney and Paul Ryan, who look like 4 pointer fraternity “ jocks ” in a University with substance, not a 70 year old war veteran who could possibly get a cardiac if his hot looking soccer mom running-mate walks in the Oval Office with a couple of buttons loose at the top.

8.  Be less laid back and get hungry again. Yes, he may be the first half-cast/African American to be President of the United States of America, but he should push that extra mile to ensure that he is one that can serve the maximum number of terms allowed.

Mr President, You Inherited A Country That Incurred A Massive Debt Going Into A War Based On A Malicious Lie That Also Cost Thousands Of American Lives.

That Burden Was Left For The Future By Your Two-Term Predecessor Who Belongs To The Same Party As Your Opponent. Do Better Than Your Best Now In Words As Well As Action, And Leave The Rest To The American People To Judge!


Remind Them That They Are Paying Now And Possibly For The Rest Of Their Lives, For The Sins Of The Republicans!