LEAVE THE PALACE OUT OF POLITICS

Recently, there have been several alleged attempts to use members of our royalty for political gain.

I have been against such a move from the beginning and have advised friends, colleagues and mentors to steer away from exploiting the palace in our political forums as is the advice of every permanent chairman before each UMNO division meeting annually.

I now see why there were not many in support of Nazri Aziz from his ranks when he cautioned the Crown Prince of Johor to stay above politics. Perhaps the rest wanted the option remained open for use in the future.

If we are indeed Malay Warriors ordained by God to carry out His purpose on Malaysian soil, then we should not be seeking endorsements from the Palace nor Muftis to carry out our duty in uniting the Malays.

Soil not the purity of these two institutions with the dirt of national politics if we want to prevent a further break-up of the already broken Malay pieces in the fabric of our society, for they (Rulers and Muftis) too are ordained by the same God to serve His purpose but in the realms of their own propriety.

As it is, we have Muftis going at each other, with contradictory statements read as edicts, confusing Muslims at large on the fundamentals of the religion and its view on leadership.

In this country, it is designed such that we have nine rulers with presumably nine crown princes, not to mention other minor princelings, who have taken to being columnists in local tabloids leaning towards the opposition.

If we push for them to make a political stand, they might individually be contradicting and opposing each other; resulting further in the disintegration of the Malay unity from the Royal Houses and in between states to a point of irreparable dimensions.

Unless we can secure a united voice by the Conference of Rulers as the Supreme Institution in the country to our favour, I suggest we stay well clear of this avenue.

We have to exhaust all other possible measures before we seek Royal intervention. 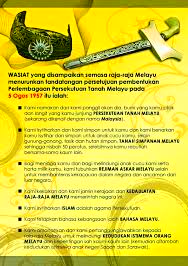 We highly respect the stand taken by HRH the Crown Prince of Johor and the caution to those who seek to "become friends or be close with HRH The Sultan" for personal gains or political capital.

As we are in no position whatsoever to speak on HRH's behalf, we hope that HRH's caution applies not only to the politicians but also to the unscrupulous businessmen with the intent of "printing money" in fast track motion in this robust and fast developing economy of the Great State of Johor, who do not observe the sensitivities and the wellbeing of the Rakyat, namely the Malays.

It is primarily the Malays, who are for now, the most loyal of subjects to the Royal Palace; based on our observation of the actions of non-Malay shop operators and factories, who during the recent Coronation, remained operating despite it being a public holiday and the Chinese dailies prefering news of the death of Lee Kuan Yew over our Sultan's Coronation on their front pages, just to name a few. 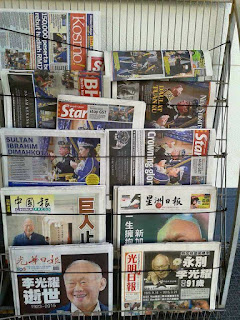 Where Their Allegience Lie

To My Fellow Politicians, Let The Rulers Remain Above Us. Only When They Remain Unsoiled And Pure, Can This Country Look To Them In Reverence And Respect As Defenders Of The Muslim Faith And Protectors Of The Malay Rights And Customs Among Others, Foiling Any Future Attempts Of Turning This Blessed Nation Into A Republic If God Forbid, We Were To Lose Putrajaya.