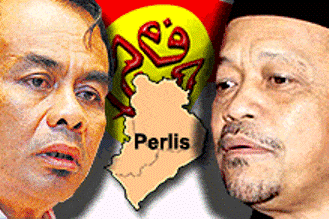 Two Big Fish In A Tiny Pond
UMNO President Dato’ Sri Mohd Najib Razak would be wise to revoke Shahidan Kassim’s appointment as the Deputy Liaison Committee Chairman in Perlis if he can’t command the loyalty and respect of an arrogant “has been” who fails to recognize the chain of command in the Party.
Shahidan was quoted to say in The Star, “I will talk to the party president before deciding whether or not to accept the appointment. I want to know the KPI (key performance index) results of the state first,” while openly criticizing Menteri Besar Dr Md Isa, calling him a weak leader who failed to strengthen the state Umno.
This is a State which is not much bigger than my UMNO Division of Pulai with leaders who can’t even hold the fort together creating a headache for the leadership. There are only three UMNO divisions in this State, so small it could be run by a sick Mayor with more success!
I’m saddened by the fact that we Malays, especially our unpolished leaders have a tendency to shoot our mouths off whenever the press shoves either a microphone or a tape-recorder in their faces trying to gain political mileage, without realizing that they are locked on the reverse gear! Why can’t we learn from our close neighbours and show more class in keeping our cards to our chest and reveal nothing especially when our backs are against the wall instead of snitching on one another like a political whore with not much legs left to show?
Even if Shahidan had a valid grievance to air, he should do it privately with the President instead of declaring it openly through a Chinese led English newspaper which would gladly print it with much pleasure looking for cracks within UMNO.
Dato’ Sri Najib is a gracious and fair leader in bringing back past leaders whom he thinks can still contribute in their respective capacities but for this blatant insubordination, Najib should make an example out of Shahidan as a warning shot to UMNO divisional leaders that the party under his watch will not tolerate being held at ransom and is willing to lose a few if it means cleansing the party of this filth!
Twenty years ago when I was in high school, I remember there was news of a strike by the Singapore Airline pilots. My memory was refreshed by my company Chairman Dato’ Nik Kamaruddin Ismail at our meeting this morning. Prime Minister Lee Kuan Yew gave the pilots an ultimatum and said that if they did not come to work, they will be out of jobs as he was willing to rebuild the Airline from scratch without even flinching, with other pilots who are willing and able to be recruited. They caved in and behaved themselves relatively well afterwards.
UMNO President Najib Razak is in a stronger position in the party as the majority of us are banking our lives and the future of our children on his extraordinary leadership. His position is also strengthened by a capable Deputy in Muhyiddin Yassin. We can afford to lose several loose heads in UMNO without suffering any damage as long as Najib exerts his power either explicitly or otherwise. This he should have learned well from our fourth Prime Minister Tun Dr Mahathir Mohamed who mastered this skill exquisitely.
Make No Mistake! We Have Faith In Dato’ Sri Mohd Najib Razak. The Question Now Is; Has Najib Razak Got Faith In Himself To Lead The Party With A Stronger Hand?
Posted by TPJ at 1:31 AM 4 comments: 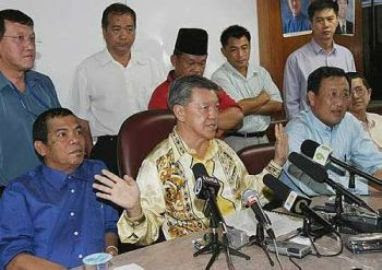 Soi Lek Using Up First Of His Nine Lives At This Press Conference Witnessed By The Late Sulaiman Taha.
1. We begin by reciting Al-Fatiha for the soul of my comrade Datuk Sulaiman Taha, the State Assemblyman for the seat of Tenang who passed away recently. May he rest in peace and his family be granted the courage to manage their great loss by the Almighty. We also thank his family for their sacrifice and the great service that he rendered on behalf of Barisan Nasional.
2. Straight up with the statistics, this was the result for the state seat of Tenang in 2008. YB Dato Sulaiman Taha (BN): 6,367; Hj Mohd Saim b Siran (PAS): 3,875; Majority for BN: 2,492. Total number of voters: 14,592
3. Ethnic breakdown: Malays: 7,042; Chinese: 5,635; Indian: 1,754; Sabahans : 6; Sarawakians: 5; Orang Asli: 139; Others: 11 (as at 30th June 2010).
4. Party branches in the State seat of Tenang;
UMNO: 20 branches with 4,768 members of whom only 4,072 are registered voters; MCA: 6 branches with 3,800 members of whom 1,700 are eligible voters; MIC: 11 branches with 1,450 members of whom 1,170 can vote; Gerakan: 4 branches with 432 members of whom 241 are voters and PPP: 7 branches with 975 members of whom only 690 can vote.
5. The total number of BN branches in Tenang are 48 with 11,428 members strong but only 7,873 are registered voters.
6. State seat of Tenang is under the Parliamentary constituency of Labis where Dr Chua Soi Lek comes from which his son YB Chua Tee Yong is serving replacing him.
7. Over the past year Soi Lek has been very vocal questioning the position of the Malays and UMNO in the leadership hierarchy of this Nation forgetting the fact that the Malays were the ones who put his son into Parliament in Labis while the Chinese looked the other way.
8. Far before the Barisan Nasional Convention was held early this month at the MCA Headquarters, I had a premonition that Soi Lek would abuse Prime Minister Najib and UMNO’s graciousness by show-boating, taking jabs and potshots at the coalition’s Managing Partner UMNO, trying to act like his party was the saviour of Barisan Nasional when they weren’t even worth the shirt on their backs ever since 2008!
9. If BN’s Chairman Najib Razak started the Convention with a perfect upswing and most inspiring speech that just needed a basic follow-through by component members to complete the beautiful stroke, it was Chua Soi Lek from MCA who just had to break the momentum shanking the message that should have shown unity, cooperation and renewed vigour heading towards the general election that is already in clear sight!
10. As it is God’s Will, The Passing Of Sulaiman Taha Forcing A By-Election Of A State Seat In Labis Will Be An Acid Test For Soi Lek Because If He Can’t Even Bring Back The Chinese Numbers In His Own Back Yard Being The President Of The Largest Chinese Party In The Nation, He Would Yet Again Be A Disgrace To The Malaysian Chinese Association And Should Just Return To Being A General Practitioner In A Small Village Clinic Taking Blood Pressures And Pushing Panadols And Medical Chits.
*Statistics were provided by Abib from UMNO Johor.
Posted by TPJ at 12:12 AM 2 comments: