A King's Ransom In Loyalty For A True Monarch 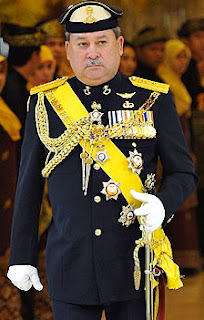 Ibrahim
The Sultan of Johor

In The Quran and Sunna regarding the Exalted Status of Righteous Monarchy and Kingship
Monarchy and Kingship were praised by Allah as one of the greatest gifts He gave to a Prophet, as was in the history of Daud (AS), and later Sulaiman (AS), who was given a Kingdom so great like no other after him.
A Kingdom was also offered to Muhammad (SAW) as narrated from Abu Huraira and stated by Al-Haythami and Ahmad Shakir in Ahmad Musnad’s Hadith (#7160).
When the Angel Gabriel among his other messages said: "O Muhammad! Your Lord Told Me To Ask You: 'Shall I Make You A King Or A Servant And Messenger?'"
Gabrîel said: "Humble Yourself Before Your Lord, O Muhammad!"
The Prophet (SAWS) said: "A Servant And Messenger!"
This Hadith is evidence of the Honoured state of the Monarchy having it mentioned in the same breath in line with being “His Messenger and Servant.” And Allah knows best.
Being the Ruler of the most privileged State, which is said to be one of the first to bring Civilization to the Malay Peninsula owning some of the most exclusive real estates in Asia in the South of it’s border, Sultan Ibrahim of Johor is truly Blessed by the Al-Mighty.

The Citizens of Johor from all walks of life are cordially invited to recite their Pledge of Allegiance to the Sultan and the State by The Secretariat of the “Himpunan Menjunjung Taat Setia” .
at
The Palace at Pasir Pelangi
On
10th June 2012/ 20th Rejab 1433 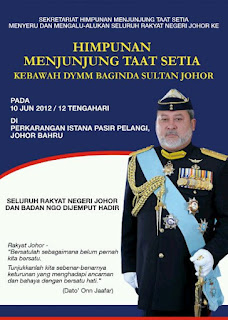 And For As Long As His Royal Highness Sultan Ibrahim Ibni Almarhum Sultan Iskandar Remains Just, Fair And Equal, Executing His Role In This Life And In The State Of Johor As The Defender Of The Islamic Faith, Protector Of Malay Rights And Customs, And The Upholder Of The Constitution, He Will Continue To Be Blessed And Enjoy The Allegiance Of His Loyal Subjects.
May His Be The Reign Of The Righteous King!
Long Live Sultan Ibrahim
Daulat Tuanku!
Posted by TPJ at 3:39 PM No comments: