WE NEED A HOME MINISTER WITH LESS MOUTH AND MORE GUTS! 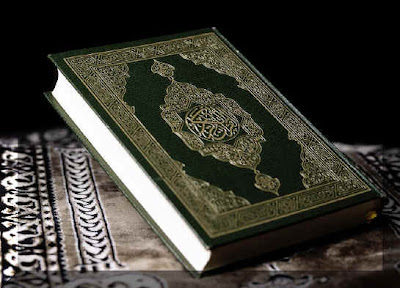 The Holy Quran
There is nothing more sacrilegious then to allow Quranic verses to be used by infidels for their political advancement or any purpose other than embracing the call to Islam. If this is allowed to continue they will start purchasing the Holy Quran to pick and choose verses that will serve their purpose and twist the minds of the Muslim Malay majority while placing it next to their kennels and reciting the verses during a swine eating feast among their own just for amusement.
The Home Minister should stop with the rhetoric he grew up with in UMNO Youth and start translating his warnings into action. It is bad enough that Malay rights and privileges have been verbally abused by our own partners in the BN Coalition without action being taken while he was Head of the Youth Wing, now the infidels are violating the Holy Quran and soon will be waving it in our faces while the Minister in charge keeps on warning them with the good old Malay proverb “ Jangan bermain dengan api, nanti rumah akan terbakar ” (do not play with fire, or you’ll burn the house down). Well Minister, might I remind you that your master bedroom is already on fire while you’re still fondling with rhetoric.
Just because a political party under the guise of Islam feels that it is alright for an infidel to recite verses from the Quran to Muslims without embracing Islam, it doesn’t mean that it is religiously correct. It is up to us with a whole battalion of Muftis and Ulamaks as advisors, to act on it expeditiously. The Holy Quran is regarded as a sacred guide to Muslims. It contains the Revelations of God to Muhammad (PBUH) His Messenger. It is also handled by Muslims in a pure state under ablution with care and much respect. This is definitely not observed by the non-believers.
This arrogant act by the infidels will stir the soul and burn the blood of true Muslims and as we have all seen, terrifying circumstances can occur in the name of religion. It happened in Ireland, New York and even Bali, which is closer to home. The peace and security of this blessed Nation is not to be taken for granted. If the Minister in charge hasn’t got the stomach to do his job and prevent a self manufactured catastrophe by imposing the Internal Security Act on the provocateurs on the Islamic faith, then he should resign and give way to someone with more masculinity.
Posted by TPJ at 12:38 PM

Islam is for Muslims. Non-muslims have been analysing Islam ever since the time of Prophet Muhammad.
Many do so for many reasons. Some do it to seek knowledge so that they can pass on to others. Many study Islam to insult and ridicule Islam such as to say Islam is not fair to women,mistreat them and syariah laws are archaic....etc
Very few non-muslims embraced Islam after searching and studying it.
Professors in western universities who teach Islamic jurisprudence, Arabic History, Persian History , Islamic Finance are all non-muslims.British and French universities are notable.These orientalist have been studying Islam much long before the Malays in NUsantara learn of Islam.

You seemed to be annoyed by some folks here like; Lim Guan Eng or Gopala quoting verses from the Quran.Of course we know their motive !
I get sick of non-muslims trying to take advantage of muslims by trying to impress us when they themselves are not practising the faith.
Look at Prudential Insurance, HSBC Amanah, OCBC,Hong Leong Bank, Standard Charted, Public Bank Group...Thay are licensed by Government to sell Islamic investment products to Muslims. Utter insult to Islam. Non-muslim managers telling you about mudarabah, musyarakah, bituminajil,profit sharing finance.

Very soon we may have non-muslims conducting "Kursus perkhawinan" for would be muslim couples.

The Bankers, Syariah Consultants, Takaful saleman, Unit trust saleman and other non-muslims targeting muslim customers would be quoting the verses from Quran to close their sales.
What say you....Islam is universal. You don't have to be a believing muslim to convince muslims to do business. Muslims are easily fooled ....
I don't support your call to put only politicians in ISA. I would rather put a blanket ban on non-muslims from touching any subject about Islam. Non-muslims have no business to talk about Islam.

These two politicians recited the verses from the Quran to hoodwink their Malay Muslim audience into supporting their cause and party while probably laughing their heads off in private when they were successful in selling their commodity to the naive audience.

Sir, I'm more annoyed at the Muslim imbecile holding office who is not taking appropriate measures to halt the spread of Islamic Evangelists among infidels than I am with DAP and Gopala. Naturally these people will try anything and stretch their luck to the limit, but under this twit in the Home Office, there seems to be no limit.

Yes, the govt should limit the sale of Mudarabah and such financial instruments to Muslim banks ONLY. It will definitely increase their earnings and revenue. Makes no sense to allow infidels to sell Muslim products. Soon we'll find them hawking Qurans or Hadiths at mamak stalls while we're having teh tarik.

I remember one wedding of a Malay big shot at Mandarin Oriental that commissioned a popular Chinese designer to do the dais (pelamin). The price? A whopping RM150,000!!!! I'm told that they keep all the pelamins of their children in their mansion. But that's beside the point, the question is, A CHINESE DESIGNER FOR A MALAY PELAMIN? WHAT'S UP WITH THAT?

I didn't target politicians, but infidels in general. Anytime they touch on Islamic matters inappropriately, stick them in Kemunting and play the verses over and over again, all day and all night till they end their term.