NAJIB PUTS UMNO BACK IN THE DRIVER’S SEAT 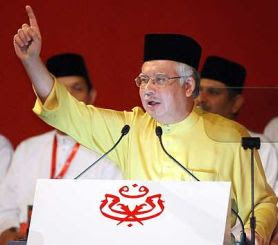 After more than a year into the current term of the Barisan Nasional Government, back-
paddling, side-stepping and taking more hits than a rugby stand-off, due to the lack of loyalty from our fellow members within the coalition taking advantage of our gentle culture, UMNO is back with a spine at last thanks to the authentic leadership of Dato’ Sri Mohd Najib Tun Abdul Razak.

Najib delivered a blistering speech in the opening of the UMNO General Assembly last week in the presence of leaders of all component parties, some of whom got too comfortable scoring political points within their own community bashing UMNO with accusations of being racists. Najib ordered them to mirror themselves and their parties’ ideologies first before pointing to UMNO. His message was loud and clear even for the deaf in the Merdeka Hall on 15th October 2009. If UMNO were racists, there would be no Chinese, nor Indian schools allowed in our education system, almost warning the ungrateful partners without having to mention it, that if these accusations continue to be heard, these privileges might be reconsidered in the future. Even Singapore, a Chinese led City-state doesn’t have a Chinese based school in its system and certainly NOT a Malay school.

His inspiring speech also sealed the amendments to the UMNO Constitution making it one of the riskiest moves the party has ever dared to make, proving to the whole country that the oldest and longest uninterrupted governing party in the world was able and willing to change and be more democratic while being dead serious about curbing corruption. Any manipulation or corruption to the new system will be solely on the backs of the leaders now as opposed to the normal 2,600 odd delegates who have nobly given up their rights, just to restore the party’s good name.
PASSENGERS AND FREE-LOADERS

While UMNO and MCA (having lost Chinese support and are themselves in very deep trouble) have changed their leadership twice in the last 6 years to rejuvenate their parties, MIC has opted to go classical by retaining their President of more than 20 years who is accepted by the party but generally despised by the larger number of its community and the Malaysian people at large.

Najib and UMNO have been supporting these bad bags for far too long giving them the benefit of the doubt until it was evident that we were doomed to unnecessarily sink together unless they were forced to swim for themselves, like they were able to when they tried to swim away from us a few months ago not following party lines. That is why the Prime Minister accepted the invitation to officiate the Makkal Sakthi party representing a part of the Indian community just before the UMNO assembly. Now, besides MIC, BN has two other Indian parties that support the government, though they are not official members of the coalition. Before that, Najib was invited by the Batu Caves Temple Committee to a function attended by thousands of Hindu followers in the absence of Samy Vellu.

Today it was reported that Ong Tee Kiat and Dr Chua Soi Lek were summoned by the Prime Minister and presumably given a dressing down for the sake of Barisan Nasional reminding them that the MCA should be put above their personal interests. This exhibition of leadership quality by Dato’ Sri Najib Tun Razak is a breath of fresh air and has been absent ever since Dr Mahathir Mohamed retired from active politics.

Last week the Prime Minister also hinted that in the future, he might change the method of choosing the members of his Cabinet, branching away from the tradition of allocating certain number of seats according to the importance, seniority and the composition of the members in the coalition. In respect to his “People First, Performance Now” tagline, his method of choosing Cabinet members after this might be based on the person/ party’s ability to deliver on the promises of his administration and number of seats won in Parliament.

I have been an UMNO delegate for the main body for the better part of my 20 years as a member. I must declare that besides the one where Dr Mahathir abruptly announced his retirement, the recent assembly, was the most memorable and motivating UMNO Convention I’ve ever attended and it was due to the spirited leader that we have in the current President. He has shown that he is not only in full control of UMNO, but also the Barisan Nasional and Government. The rakyat of all races are warming up to him without having to go through their respective leaders nor parties representing their communities. In his new administration, there will be no more rides for free-loaders, no more political leaders/ brokers flexing their racial muscle demanding for the world when they contribute nothing to BN, and no more extortion from UMNO Warlords. Everyone will know the true meaning of Merit in Barisan Nasional under Dato’ Sri Mohd Najib Tun Abdul Razak.
I felt the thrill that seized the mind, body and soul of every UMNO delegate in the Merdeka Hall when the President wound up his speech at the 60th UMNO General Assembly. I am convinced now, that we will close ranks and move forward by going back to the basics of being united, serving with sincerity and doing so with all humility.
UMNO Is Finally Back On The Saddle, All Fired Up And Ready To Lead Again!
Posted by TPJ at 8:56 PM

aye! i wrote something along the same line http://goreng3abdul.blogspot.com/2009/10/najibs-umno-spirited-and-ready-to.html

Tg.Harun,
Problems in MCA doesn't settle anytime soon.
They have party constitution. That's why they call for EGM. We know the results.
Now, PM asking the President and Deputy to stay put and close ranks for the sake of BN. It may work for a while but it is an insult to all MCA members who voted in EGM.

During the 80's MCA had similar problems under Tan Koon swan.
Same tussel with Dr.Neo Yee Pan. In fact Mahathir sacked Neo from Cabinet. Then came Lee KIm Sai.
After that Ling Leong Sek. And we know what happened to Lim Ah Lek..
Tun Gafar Baba played the peacemaker role. The chinese don't seemed to give up clan rivalry due to EGO.
Many Deputy Presidents have to take the blow, such as Lim ah Lek and recently Chua Jui Meng.

The current leaders including Dr.Chua who was caught red handed sort of pornography are adamant and reluctant to go. UMNO should not heal these MCA self inflicted wounds. The PM should instead launch a new Chinese based party as he did for Makal Sakti...That would wake them up!

I read your article and think it was brilliant!

Yes the MCA has a Constitution, and in that Constitution, it states that in order to dislodge a President, they'll need 2/3 of the delegates to vote him out. They did not garner enough which means by law, rules and regulation, he is entitled to stay albeit as a damaged President. It is not an insult to MCA because it is in accordance to their rules and by maintaining his position, he is respecting the Constitution which the party upholds.

Yes, the Chinese have been proven to be unable to manage leadership and even corruption. All the while I thought they only corrupted Malay leaders, now we see in the case of PKFZ, they corrupt their own as well.

There are no new Chinese parties in the horizon. They've either holed out with MCA, GERAKAN or the DAP. But Najib is brilliant and is reaching out to the Chinese without going through any of these Chinese parties so that loyalty comes straight to the government and not through their Chinese based establishments.