SUGGESTIONS TO THE PRIME MINISTER ON HIS LINE UP 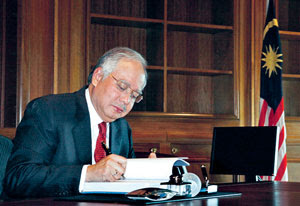 LEAVE PEMUDA OUT OF THE CABINET

If I had the ear of the freshly-minted Prime Minister, this would be my advice. The youth wing in the last 10 years has failed UMNO as well as Barisan Nasional miserably in their role to rope in youths and yuppies to join programs that could benefit both parties. Some people also remarked, “it would have helped if there were programs in the first place”. After Zahid Hamidi left the Youth stage, no motivational, mental strengthening courses or the sort were organized. This led to a very large void in our effort to reach out to the future generation in our society. This is evident in our failure to secure the votes from the channels 4 & 5 (saluran 4 & 5 – new and young voters) in the last election.

Perhaps the main reason for this is because the past youth head was busy being a Minister that he forgot his role in the party. He also failed in his duties to uphold the position of the Malays perhaps trying hard not to sit uncomfortably in the Wednesday Cabinet meetings with the MCA and Gerakan leaders in the room.

So judging by the misjudgments from our previous youth chief while he was a Cabinet Minister, it would be wise for the Prime Minister not to appoint the current one into the Cabinet so that he can concentrate on leading the youth wing and win back the support of the younger generation like he did when his father-in-law first came into office riding on rhetoric. Furthermore, we need a strong youth chief to hit back when parties like the MCA try to blindside the new Prime Minister by using a lowly Central Committee member to press for a second Deputy Premier’s post for their party. If there is to be a strong youth leader that we can bank on, it would be Khairy Jamalauddin. Of course, that is an unfair statement because if we want to make a comparison with his predecessor, even the sick Noraini from Puteri would have a stronger advantage.

If he is indeed safe from further prosecution, and can continue to lead the wing, let’s not waste his talent but use him to UMNO’s advantage, Khairy has the charisma, the intelligence and the aggression. He may have major faults, some perhaps unforgivable, but as far as UMNO Youth is concerned, he has done more in the last 4 years than his predecessor had in the last 10. I almost forgot that the wing was still in existence after Zahid’s term until this chap came along.

UMNO Youth started off as a pressure group. Let’s go back to basics and not pretend that they belong to the Big Boys’ Club.

APPOINT SHARIZAT SENATOR OR PUT RAFIDAH BACK IN.

I understand only two Wanita members won their parliamentary seats, they are Rafidah Aziz and Halimah Saddique. Based on this, if Sharizat or any other academically qualified member of the Wanita wing won’t be appointed Senator to fit in as minister, then Rafidah should be appointed instead of Halimah to avoid a MAJOR embarrassment to UMNO. Being a losing candidate in the recent Wanita elections, Rafidah would just concentrate at being a minister with much humility considering she hasn’t got the Wanita wing to extort the leadership with anymore. Noraesah would have made a good candidate for Minister but her tenure as Senator will end soon and she lost in the previous general elections for a Parliamentary seat.

I realize that suggesting Rafidah’s name is inflammable but if Sharizat’s not in, she’d be a good stand-in, at least until the next elections. Ironically, the others who are academically qualified and can lead a ministry can’t be promoted because of technicality, while one who can be promoted is academically unqualified and wouldn’t know what to do with herself in the ministry.

NAMES WORTH CONSIDERING FOR PROMOTION

1. Khaled Nordin
2. Dr Rais Yatim
3. Syed Hamid Albar (if dropped should seriously be considered for a UN’s post)
4. Azalina Othman (if she is not prosecuted)