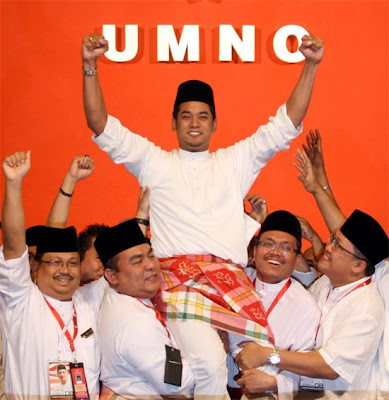 I don’t see what all the fuss is about. Khairy Jamaluddin or KJ as he is fondly known, wasn’t included in Dato Sri Najib Razak’s Cabinet last week. The Youth Chief’s post doesn’t necessarily come with a seat in the Cabinet. If in the recent past it has, we can all consider that a terrible accident as the Youth Wing and its role in the party were totally neglected because of the previous person’s conviction towards his job as a Minister.

Prime Minister Najib’s decision not to appoint Khairy minister is dead on target enabling him to correct the mistakes of his predecessor. Khairy should work the Youth Wing like a four wheel drive vehicle, roll up his sleeves and get his hands dirty going to the ground gaining the confidence of the youths and to an extent even the public at large. A lot can be done if indeed his intention to contest was for the sole purpose of leading the Wing and not to be Minister.

If Khairy is safe from further persecution, he can turn the tables and come out smelling like a French eau de toilette by proving his mettle. Let us see if UMNO does well by recycling him or writing him off like scrap metal.

In recent days, it has been reported that the MIC might withdraw its representatives from the Cabinet possibly for these reasons; 1) MIC didn’t get enough respect in the latest Cabinet line up. 2) The President wasn’t appointed Senator and Minister like Koh Tsu Koon, the GERAKAN President. 3) MIC will concentrate on strengthening their support base within the community it represents.

If the offer to withdraw from the Cabinet is put forth, Najib should do the country a big favour and accept it. Like Khairy Jamaluddin, MIC should forget about sitting in comfort and enjoying the perks. They should go down and meet the Indians and the Youths who are either on the fence or on the other side to win their confidence in us, preparing for the next general election which is not very far down the road.

Barisan Nasional, namely UMNO has been very generous in that it has gone against its members’ wish for a Malay candidate to stand in a Malay majority constituent out of respect for comradeship, even when it was crystal clear that the particular comrade was undeserving. Now after failing yet again to live up to our expectations, they disappoint us one more time with their ungrateful gesture.

It is time to call a spade a spade. MIC will fair better without its current President. He is beyond recycling and MIC has become a liability to the National Front. The message should be loud and clear to them. They should either SHAPE UP OR SHIP OUT!
Posted by TPJ at 5:09 PM