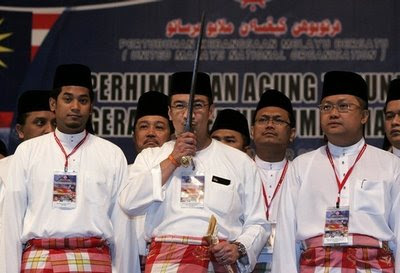 Rhetorics are no longer marketable in UMNO
I can safely represent the majority of the 3.4 Million UMNO members by sending this message to the President-in-waiting and the Vice President “wannabe” and outgoing Youth Chief, Hishammuddin Hussein who have in the past been known to apologize unnecessarily for the conduct of some of the members who acted on their own cognizance while responding to a valid cause.

We demand that our leaders take us out of this apologetic syndrome that has plagued us badly ever since Hishammuddin FAILED to live up to our expectation as a true Malay leader when he was unable to defend Malay heritage and the tradition of hoisting the Malay Keris. Since then every single act by UMNO members defending our party and its ideals have been followed by calls for us to apologize.

In the most recent case, when true red blooded Malays who have neither been poisoned by non Malay philosophies nor influenced by their kind financial gestures, demanded for the retraction of an unproven allegation in Parliament by a crippled and senile member of the House in the lobby, they were physically set upon by opposition members before retaliating. For this they were labeled as “gangsters” on top of being cursed and falsely accused of sending live bullets, which is unlawful, to a person who some would describe as a deserving recipient.

The file based on 97 (NINETY SEVEN) reports on Karpal Singh has been on the table of the Attorney General for the past one week according to reports on the web. Some are wondering if the AG’s office is waiting for Karpal to expire of old age before charging him for Sedition. Being an invalid and an old geaser, doesn’t position him above the Law. The longer he is allowed to “wheel” the streets, the more damage he can do with his loud and irresponsible mouth.

If the UMNO members who visited Parliament House have violated the law, let them be responsible for it. I stand and applaud their political chivalry which is a trait rapidly dying in UMNO in the past 8 years under the youth leadership of Hishammuddin Hussein.

Tun Dr Mahathir’s words of wisdom is very true,“ Not every son can be like his father ”…nor his grandfather, I might add. Our leaders should NOT apologize for the actions of the members when it is not the stand of the Party, although it may be the sentiment of the majority. At the very least Megat Zulkarnain, Ungku Mat Salleh, the Gombak and Serdang UMNO Youth Chiefs respectively have more guts than the old cripple who only dare to utter offensive words in Parliament knowing he has full immunity without having to be responsible for it.

Equal rights should be accorded to the handicapped. If they step out of line, they too should suffer the consequences according to the Law no matter how pathetic they may look in defense.
Related topic @ http://bigdogdotcom.wordpress.com/
Posted by TPJ at 7:50 PM

I've been following your posting for quite sometime and I feel that I want to give my comment and hope for a response from you..

First of all,I was also hurt when Karpal said that "UMNO celaka" and "PEMUDA UMNO yang hantar peluru tersebut"
These are serious allegations and u can see how arrogant his face when he uttered those words.Tak ada langsung rasa hormat dan malu kpd orang lain..

Is it true that an MP can say anything he wants in Parliement?
Is it the reason why police can't take any action against him??

I also don't care if he's crippled as I have no symphaty to a snobbish and arrogant person like Karpal Singh...

I think it's time government act on the 97 police report against him.He's out of control and becoming more kurang ajar..

And to Pemuda UMNO please don't dare to apologize.I know you guys are not stupid enough to touch the old crippled..I saw what happen in You Tube and know what really happen there..

Adios and hope to comment again in the future.

Yes Parliamentarians have immunity. Yes the police cannot take any action against anythig spoken in parliament.

The file is on the Attorney General's table waiting for action to be taken. We'll wait and see. It's behaviour and attitude like these that make cases pile up and it worsens the situation on the ground. When action is slow in coming, people will take the law into their own hands.