A CRIPPLE’S ATTEMPT AT HUMILIATING THE SULTAN! 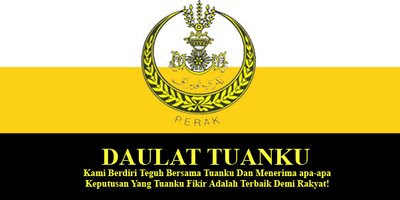 Courtesy of Rocky's bru
Yes I said it. He’s an invalid hiding behind his handicap for sympathy hoping not to be hit back after trying to be a hero ridiculing a Malay Sultan and stoking anger amongst the Malays who are NOT DAP servants. Will his action of turning the Sultan of Perak as a defendant in Ipoh on Tuesday fly at all? At the very least he will get the satisfaction of humiliating the Sultan. That is perhaps the general idea. 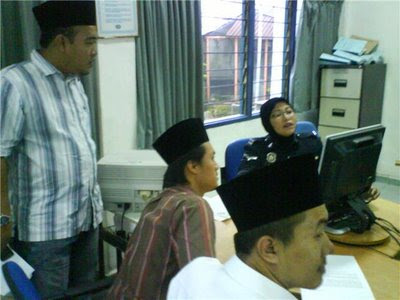 Well, a few responsible young citizens from Johor Bahru have made a police report on him. Although they may not have a standing considering it is not done in the State of Perak, but this serious objection must be recorded nonetheless by someone if not the UMNO Youth Chief and his battalion who are contented with just watching with their hands in their pockets, or busy campaigning for party positions instead of practicing what they preach on Religion, Race and Country. These UMNO traitors should be SACKED under the I.S.A. along with the cripple who committed what could be described as sedition.

Below is the report. 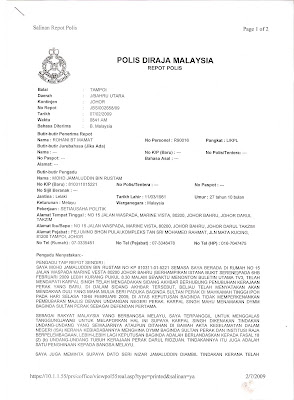 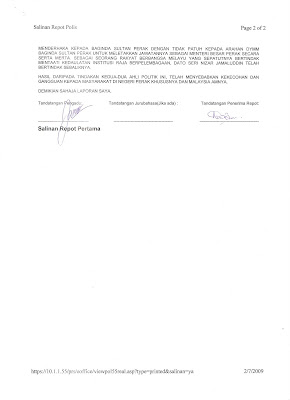 Congratulations to En Jamaluddin Rustam, En Jasri Hj Jamil, En Rais Jaafar and En Shaoufiq Izwan for taking action instead of just talking about their contempt at the coffeeshops and warongs like a large section of the general public.

Salam TPJ, i hope the police will act fast to arrest Karpal Singh because of his kekurangajaran dan kebiadapan..

Yes, Action must be taken fast before it takes a life of it's own. Those bloggers who've cursed the Sultan also should be investigated and thrown in under the I.S.A. They can be traced and efforts are under way to detect them.

I should ask them not to be too shocked when someone comes looking for them at the office. They should just surrender their laptops and follow the officers.

Salam TPJ
I don't know if this had been addressed in the blogs (I haven't been surfing enough)but what action can the Sultan to those who "ingkar" on his command (titah)?

I thought the Rulers can only be brought to the special court...the last case heard being that of the late Yam Tuan of Negri9. In the 80's & 90's the UMNO led govt also cause great embarrassment to the royalties. Through the electronic & printing media they virtually "BOGEL" KAN RAJA2. So what's the difference with what Karpal is doing now, though i disagree with his action just as i disagree with what umno did in the past, but you being an umno member should have expected this comedy from him and all the DAP members....in Johor they refused to wear the songkok in an official function to be attended by Sultan. You should make a list of all the recalcitrant actions of Karpal & DAP members which blemish the standing of the Royalties.
As for the 'Ketua Pondan Umno' the less said about him the better...!
Oh yeah can you enlighten me on umno's current policies. Is one of them encouraging the gay public to join the movement...formerly they even had a gay as one of their wing leaders...wow gayness in umnoness. There is too many kaum nabi Lod in umno. You better watch your back!!!!! Good luck...

ASW. Bro.
This is my first comment on your blog.I hope this blog will not being abuse by the bloggers.

May The Force Be With You.

Yes, I'm sure that the only court that hears cases involving Sultans is the Special Court, as we are told. That is why I said that the only reason Karpal did it was to humiliate the Ruler.

Yes, the UMNO led govt did go overboard in their attempt to put "some" Royalties who deserved it in their places.

The difference between Karpal and UMNO then is that Karpal is a crippled Benggali trying to score points with non Malays rediculing the Malays by humiliating one of our Sultans. UMNO was reprimanding an over the top Ruler and his son acting like gangsters. Furthermore, it is not the place of a non Malay to correct or advise Malay Rulers.

Yes the DAP rep in Johor refused to wear the songkok, but the idiot was rightfully refused entrance to the State Assembly.

As for Kaum Nabi Lud in UMNO. It's been there for a while. However, it was more "in the closet" then. Now it seems they're beginning to come out in the open.

Don't worry about me, Insha'Allah I can sense a faggart from miles away. I'm homophobic.

I'm not sure what HRH can do but I'm sure in the case of Karpal and Nizar who has admittedly committed treason, there is a catalog of actions to choose from.

When I was small, I remember the Sultan of Johor " buang daerah " a couple of guys. I'm not sure if it is within the boundaries of HRH's powers though.