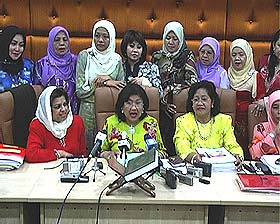 Do those standing behind look like they can thrust the movement forward?

It seems the sickness that has been manifested in the main body until recently, which is to avoid a contest on the pretext of maintaining unity, has crept into the Wanita wing.

This “peralihan kuasa” crap is beginning to get on the nerves of every UMNO member because of the constant whining of supporters of both Rafidah and Sharizat. They pretend to seek unity and want to protect the strength of the wing, yet their behavior prove otherwise.

The wing showed more class under the stewardship of Tun Fatimah and Tan Sri Aishah Ghani, perhaps because these two former leaders turned themselves into servants of the wing instead of using it to enhance their political positions and for personal economic gains.

In the last 30 years, how have the women’s wing evolved? Most of the branch and division chiefs are still computer illiterate, the branch chiefs still attend cooking and sewing classes like when the wing was known as Kaum Ibu back in the 50’s. I ask again, how have they evolved? It seems like they are deliberately kept at that level to ensure that they are loyal to their leaders and continue to follow orders like soldiers on the pretext of doing it for the future of their children and those who come after them, when they are actually conditioned that way so that only the few can remain at the top for long spells.

I wonder how many in the Wanita Executive Committee possess college degrees. How many besides Rafidah, Sharizat, Raja Ropiaah and Dr Noraesah are fluently bilingual? After 62 years in existence, what have they achieved? They are by far the most loyal and hard working members of UMNO, but don’t they deserve better? Why are the less loyal and new members in UMNO getting more benefits, receive Datukships and are wealthier under the party? Could it be because the rookies are young and fresh or the Wanita leaders are not fighting hard enough for their welfare? Should the Wanita members be treated this way for all their sacrifices? Shouldn’t their leaders help them to get better lives just like they do for themselves?

Now, it seems they are taught to suppress democracy. The majority of UMNO members do not see what the big fuss is all about. Why are they acting like wild creatures snatched from the woods and left in the middle of the city? Why do those close to the top leaders act deranged and disoriented? The State chiefs too should just shut up and let the forces of democracy decide whom they want to lead them. That is democracy. Unlike those at the top, the grassroots have no problem in falling back in line once the election is over. The leaders are the ones who have to learn how to conduct themselves appropriately. UMNO doesn’t belong to the powerful few.

I never thought I’d say this, but Wanita UMNO should learn from the Pemuda wing on how to embrace democracy and behave like leaders with class. Take the nominations and go to the polls without whining like old spinsters, no pun intended. It is further damaging to the image of our party which is for the most part already in shreds.

The Constitution allows contests and protects the outcome. However, if a transfer of power between Rafidah and Sharizat doesn’t materialize after Rafidah wins uncontested, there is no provision in UMNO that can force the latter out for the next 3 years at least.

SO, Wanita UMNO should stick to the Constitution and avoid future trouble by creating sticky situations with no provisions. If Rafidah wins, she should rightly continue to lead the movement until the next election. If Sharizat wins, it is self-explanatory.

Today, I read the Prime Minister will speak to the leaders upon his return from Uzbekistan to resolve a problem that already has a solution staring in everyone’s faces. I can only wish him good luck in dealing with Rafidah, especially when his sidearm is loaded with blank cartridges, so to speak.

Lastly, without showing too much disrespect, I urge the visitors of The Patriot to scroll up and take a really good look at the picture above. Now tell me honestly, besides Rafidah and Sharizat, do you see any potential in ANY of the rest to lead the movement? Isn’t it evidence enough that they are pre-conditioned to remain in the 50’s while one or two shine like a hundred carat diamond in their midst?

Too much has been said about grooming with almost nothing to show for. It is time the Wanita UMNO leaders straighten their Kebayas and show some class.

I second your thoughts on this!

The more I looked at the picture the more it resembles the Star Hill division's wanita movement. And believe me, it's the same everywhere. We do admit that this is the most hard working wing that really reach down to the masses. But, things have changed and time has gone passed by us. We need 'class' and please DON'T recommend them to put on their kebayas, PLEASE!!!

yezzz siree , I took a hard look at the picture and i wouldn't dare comment on their abilities, for only time will tell when they lead. But what strike me most in the picture is The Quran placed on the table or is it a guide book to cooking & sewing? If it's The Quran i hope it's not put there as a decor! The ladies should read & follow The Quran (Firman Allah) and Sunnah Rasullullah as a guide in exercising their resposibilities & duties.
If you ask any of them of the historical struggle of the former Kaum Ibu and leaders such as Ibu Zain i'm sure they know zilch 'bout it...forget 'bout them possessing degrees!!!

It is the Holy Quran.

I hope there's is a member of the committee that can enlighten us to whether it is recited before every meeting like in somne of the UMNO meetings in Johor since it is after all, on the table.

If not, then I guess we all know the purpose of the exhibition.