It’s official. Dato’ Seri Shahrizat Abdul Jalil has made the imminent choice of contesting for the Wanita top post in her announcement early this afternoon. This is a right move on her part in announcing her decision based on the groundswell before the Right Honourable Prime Minister returns from abroad in fear of perhaps being persuaded to stand down and agree to the original, yet not practical plan of power transfer in the month of June of 2009, which is only three months after the UMNO Convention, leaving the Wanita wing without an official leader and deputy.

In the past few days one after another head of the Wanita Divisions pledged their support for the early and more practical transition, including the ones who had nominated Rafidah in their divisional meetings before this. They say it was alright initially because the UMNO Convention was originally planned for December, but with it being postponed to March, it is hard to justify Tan Sri Rafidah holding on any further.

Puan Nahar bt Ahmad, Wanita Head of the Kota Raja Division, Selangor fears that with Shahrizat as only an Acting Chief, and without an official deputy, it might invite a certain wanita leader from a component party to demand the right to spearhead the Barisan Nasional Wanita wing in the coming General Elections if the next UMNO elections will be yet again postponed to give way to it. 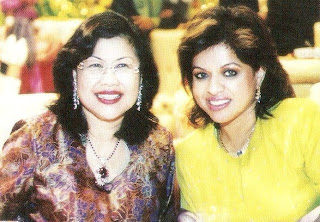 Salam TPJ
Before the start of the division meetings, I told the other half that the Wanita Umno elections would be a mundane one especially since everyone had agreed somewhat on their leadership transition plan.
I stand corrected. It will now be closely watched.
While Shahrizat and Rafidah will have to thrash it out in the March party election, Kamilia is deemed to have already won the deputy chief’s post uncontested.

Yes indeed. I think the contempt they have in the Executive Council for Shahrizat is more because they think they got sold out at the Deputy Chief's level.

Many think they deserve to be the number two and were bitter because Kamilia got " a free ride on an aircon bus ", as one puts it.

On the quiet, I found out from someone on the inside that effort is being made by certain office bearers to confront the PM and ask him to persuade Shahrizat to withdraw. Good luck with that now that she's declared her intention.

If the contest proceeds despite the intervention of the 'lame duck' president, the immediate undeserved winner (56 nominations, less than 30%for deputy head) is Kamilia Ibrahim. The big loser is the 'Pengerang Kid' and other more capable candidates!!! Perhaps the male species should learn a thing or two from Kamilia on how to get an easy victory incurring minimal or no 'expenses'. I'm sure they are all dying with envy!
Hell has no fury like a woman scorn but when she scorn she looks like 'Pontianak'!

The Pengerang Kid may have been played out initially by Rafidah and Shahrizat but it looks like the real loser will be Rafidah.

The whole Wanita Wing barring exco members and some others want her out and Pak Lah made it easier by postponing the Convention till March making it illogical for her to hold on only for three months.

Trust me, if the Pengerang Kid really wanted the post of Deputy, she would succeed. She just didn't go full steam on it and wanted to see the Wanita cleansed of Rafidah first and then make her move next time.