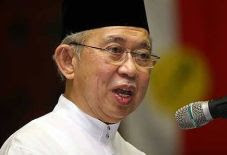 Man of The Hour
YBM Tengku Razaleigh Hamzah (TRH) the gentleman statesman returns from abroad early Saturday morning to what will be a warm welcome from his supporters and curious onlookers who’ve been invited to receive him. For the next few weeks, the politician Prince will be the flavor of the month considering there will be a by-election in his constituency of Gua Musang, namely for the State seat for Galas after the passing of the Assemblyman, whose name if you noticed have not been mentioned ever since TRH was said to have accepted the position of Operations Director for the by-election which is by tradition a post usually held by the Deputy Prime Minister.
The Patriot would like to pause and offer our deepest condolences to the family of Al-Marhum Che Hashim Sulaima and thank them for their unselfish sacrifice in allowing him to serve and spend time with the Rakyat as State Assemblyman for Galas. May his soul be placed amongst the righteous. Al-Fatihah.
It is rather refreshing to see that UMNO leaders have finally learnt some manners since the first day of Aidilfitri. Showing respect especially to an elder statesman, who presented his own piece of land to the party, where we now make our fiery speeches, meet and dine for one another at the yearly UMNO General Assembly, shows that we are a cultured lot. Allowing TRH to take the reign and decide for a seat in the Constituency that he has served as Member of Parliament for nine terms is an unorthodox yet brilliant move by the top brass. Now all they have to do is give him the necessary tools and get out of his way to ensure a comfortable victory. Flooding Gua Musang with “foreigners” may backfire since speakers and politicians from outside of Kelantan may adopt the wrong approach and style and are not usually welcomed. Even State UMNO leaders should stay away and let TRH and his machinery work in peace. It’s an open secret that Kelantan leaders don’t see eye to eye with each other which gave birth to the local term “Cah Keting” meaning self-sabotaging the team out of spite for one or two personalities. By taking that approach, TRH’s team will be working harder and possibly smoother at it to ensure a victory as the total onus will be on them to deliver without the others taking the glory for a win nor having to take the blame for a loss. I strongly believe that BN will win as I was told that previously, disrespect was shown to the elder statesman by the federal government led by Abdullah Badawi by nominating an unfavorable candidate without even consulting with him. With the will of Allah we will prevail this time.
Despite what has been said and done about TRH, it was personalities like him and Tun Dr Mahathir from outside while Tan Sri Muhyiddin Yassin, Datuk Seri Utama Dr Rais Yatim and Datuk Nur Jazlan Mohamed (during the Johor State UMNO meeting with the then PM) from inside who shook the incompetence out of former Prime Minister Abdullah Badawi’s chair resulting in his early retirement, and for that we owe them our gratitude.
I would place a wager against Tengku Razaleigh Hamzah recommending himself as candidate to run for the Galas seat as unlike in the case of Tan Sri Isa Samad, he would have more to lose than to gain. I would bank all my chips on him giving his full weight of support to his nominee whomever it may be to ensure that BN wins with a bigger margin than the last won by PAS.
Finally, If Anyone Were To Think That TRH Will Fall Back In Line After That And Not Press On With The Oil Royalty For The Kelantan People, Then They Should Have Their Heads Examined. Tengku Razaleigh Is His Own Man. Let Us Just Capitalize On What He Can Deliver For Us For Now And Let The Chips Fall Where They May Until We Cross That Next Bridge.
Posted by TPJ at 8:31 PM