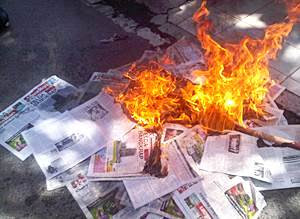 I was half cursing when I saw an article with the Malacca Chief Minister and a group of people showing their protest by burning the Suara Keadilan openly polluting the environment which is already hazy causing asthmatic symptoms to many. I thought the theatrics was a totally imbecilic act as we could be more affective by using the powers vested in us by cancelling their permits to print and distribute. The Department of Environment should haul the whole bunch up including the Chief Minister and cite them for polluting the air and encouraging others to do the same by their actions. 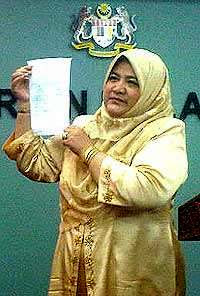 Datuk Zaitun Ab Samad. Does It Take This Lady To Do A Man’s Job?

Happily I read today’s decision by the Home Ministry represented by the publications and al-Quran text controls secretary Datuk Zaitun Ab Samad that they did something similar as regards to the permits which was not to renew Suara Keadilan’s license after it expired recently. Though the pressure perhaps came from higher officials beyond the Home Ministry, I almost took my hat off to the Minister himself thinking he finally had the guts to perform his duties as the person in charge of the Home Affairs and Internal Security. Then I thought it was too good to be true having observed his “play safe” character in the past. So I decided to let it settle a bit and see what comes after, quite like buying a firearm in America having to wait 72 hours after registering the purchase, ascertaining one’s right frame of mind. Lo and behold! Within 24 hours after taking action on the opposition’s publication, the Chief Editor of Suara Perkasa, a publication of an NGO which is inclined towards the ruling party was hauled up for an interview under the threat of being taken action against for demanding that the MCA Youth Chief Wee Ka Siong be charged under the ISA for allegedly questioning the Malay rights vis-a-vis MARA scholarships with the insignificant UMNO Youth Head looking like his servant next to him in his defense. This is akin to the Malay proverb, “ Pukul Anak, Marahkan Menantu”. In other words, they’re seen to reprimand Suara Perkasa to justify their actions on Suara Keadilan. That is a silly way to exercise one’s power. We should learn from the Singapore Government on how to deal with matters of this nature. I’d have thought that when the Home Minister along with the other two UMNO Vice Presidents paid homage to Lee Kuan Yew at the Mandarin Oriental on his visit here a couple of years back, they would have learnt a thing or two. I guessed wrong. 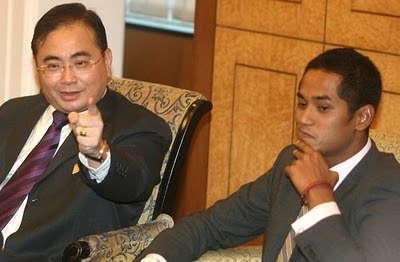 The Servant-Boy Looking UMNO Youth Leader Next To The Masterful MCA Youth Chief.

Not Renewing The Permits Of Suara Keadilan To Print And Publish Is Not Enough If The Implementation Sucks! The Home Ministry Should Go One Step Further And Warn Newsagents And Quick Shops Nationwide That Stern Action And Heavy Fines Await Them If They Are Seen Hawking The Cancelled Publication On Their Newsstands!
Posted by TPJ at 4:17 AM

'datswhy': Enough with the old political stagecraft already (or at least come up with brand-new imaginative ones). Our politicians’ fury and theatrical deployments are merely to show they’re take-charge leaders when all they care about is instant-noodle political gain. Expect the banned publication to be widely circulated in a few weeks time (with new permit numbers and validity period printed on it). Expect no announcement whatsoever when the ban is lifted. And, expect no open burning or Ahmad Maslan's jeritan 'fitnah! fitnah! fitnah!... They'll all be busy championing another seasonal cause.
Btw, LOVE your choice of KJ's pose!

Beautifully said and dead on target with the characteristics of our leaders.

As far as KJ's pose is concerned, it wasn't difficult retreiving such as he not only serves the interest of the non-Malays diligently, he always looks like their obedient servant-boy.

Truth be told, he has lost his class and confident looks, perhaps not wanting to overshadow his non-Malay Masters.