NAJIB SHUTS THE DOOR ON CHIN PENG AND HIS COMMIE SYMPATHIZERS! 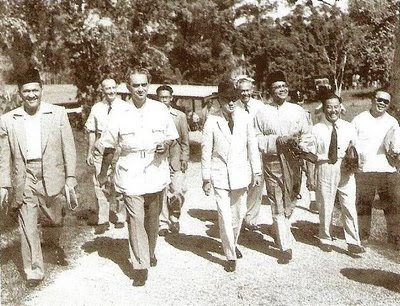 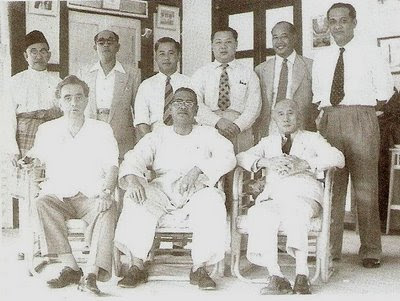 Note : There is a letter dated 9th November 1957 from the then Prime Minister YTM Tunku Abdul Rahman Putra Alhaj to my late father preceeding the events in the two pictures above but I am awaiting clearance from the National Security Division before publishing it as it has the Prime Minister's seal with the words "Top Secret" marked on the top right hand corner of the document pertaining to the Baling Talks with Chin Peng.

Back to the present, Prime Minister Najib Razak took his time but was crisp in his message last week to the communist sympathizers residing in this country. NO ENTRY TO CHIN PENG!! (I won’t use the word homecoming because it is only for those whose home this is. It does not apply to this retired butcher!).

Some of my friends have aired similar sentiments to my earlier one that Chin Peng should be brought home to face charges for War Crimes. Though I agreed with the idea initially, on hindsight, I think it would bring chaos because certain parties will surely politicize the issue and demonstrate and this time, there WILL be blood on the streets. Furthermore, we don’t need his carcass to contaminate our soil!

According to Professor Dato’ Dr Ramlah Adam in the program Isu on TV1 Sunday night, due to certain sensitivities, some of the facts were suppressed since the beginning in fear of raising anger and anxiety among the people but since there have been recent calls for the return of Chin Peng by ignorant parties, what happened during those trying times have to be told, some of which were the tearing of the Quran by them and using pages from the Holy Book to clean their private parts with. This gives credence to the story told by the grandmother of a close friend who is also the mother of a former Minister from Pasir Salak, that the communists came into the kampongs and made speeches ordering the Muslims to perform their Friday prayers on Sundays instead. Naturally many of them never made it out of the kampongs after that and the Muslims who ventured into towns in return were never to be seen again in their kampongs. But we can see what their main agenda was. They wanted the Muslims to eventually give up their faith, abolish the Sultanates and rule by terror. Today, though indirect in the beginning stages, we can see that it is heading towards that, this time with the help of Malay traitors who openly defy the Perak Sultan’s decision in accordance to the Perak Constitution.

Therefore, instead of entertaining and responding to fake democrats who are communists at heart here in Malaysia, the Government would do better by looking up the records to see who were massacred by the communists and left to float in the river, and search for their families to give them some kind of compensation or recognition in the form of funds or pieces of land for their sacrifices in the service of the Nation.
The Commander in Chief, His Majesty the King should present it personally in a ceremony to show the Nation's gratitude, and to send a LOUD signal to the Commie lovers in this country that we give no quarter to their forefathers!
Posted by TPJ at 7:49 PM

with you 100%...we dont need another political agenda...let him die where he is right now. He never fought for MALAYSIA and therefore can never be allowed to call our blessed land his 'HOME'...If he seeks permission to come back, just tell him the papers are in HELL...so if he wants it...he must GO TO....???? yes..you got it right!

I couldn't have said it any better!

A bit late on this topic.U should post it earlier.Anyway tahnk you for another brilliant piece.

My question is,who started this ruckus?Is it the guy from Gerakan party or S.M Idris?

Sorry for the delay in the posting but I wanted to hear the Man say no for sure before pre-empting him. Yes the topic was allowed to fester before something is done as is the habit of the Malay Government whenever a non-Malay issue emerges.

As far as who started it, yes it was the gentleman you mentioned followed up by the GERAKAN chap from the same State who's probably his nasi kandar buddy in Georgetown. But we're not children in a playground having to be asked who started what, unless we are ready to book him. We just want the nonesense stopped.

Only bad things will happen if CP is allowed to step foot back in Msia..

The best thing is somebody(government) should highlight the events in documentary,when did it happen(from when to when),the massacre and bad things they did to us and how many innocent lives were spared.Only god knows.

As a reminder for our present and future generation,the government must be firm and never tolerate any stupid suggestion to bring back this 'animal'back home

I strongly feel that the Penang Gerakan Chairman should be arrested under ISA because he was the one who started campaigning for Chin Peng's return to Malaysia.
Anyway knowing our new Homoe Minister,I doubt any actions will be taken.Believe me when I say this.

Just to update readers of this blog,Lee Kuan Yew will be coming to Malaysia for 8 days visit.Ha,ha.I'm running scared sir.On his agenda,meeting with DAP leaders and not forgetting meeting with Penang Gerakan Chairman..Giving some pointers on how to bring back Chin Peng to M'sia LKY's way.

Thank you sir on another brilliant piece..

Very true. It will not happen Akeem. Chin Peng will die where he is today, not in Malaysia.

The govt will be showing more of the atrocities committed by the War Criminal and will definitely not allow this barbarian to come home.

Perhaps, some form of pressure will also be constitutued against the Bastards who are asking for his return.

Thank you for your input.

Agreed. Anyone asking for Chin Peng's return should be slapped with the I.S.A.

I beleive your statement about the Minister of Hom-e Affairs to be true. He/she won't be taking any action in fact I won't be surprised if he/she will make a statement apologizing to Chin Peng for the govt's rejection.

The Govt should deploy a detail on LKY's movements to see who he meets and do them in as he returns to Temasek. Bankcrupt the buggers here like he does to his detractors back home.

Thank you Spalding for your insight.

Hi,
Apologizing to CP will definitely be in 'his/her' agenda again if BN scores miserably in the next gen elections... Don't know the relevance but the fella didnt need one when he apologized last time.

On Lim Kuan Yew's visit, a cabbie told me that renovation work at Subang airport was expedited to receive him on the 8th. So is he here yet?

Btw, your blog SIZZLES! I AM your #1 fan

Yes Mr Lee Kuan Yew is in town. His police escorted entourage complete with blazing sirens and flashing blue lights passed me yesterday at Yap Kwan Seng heading for The Mandarin Oriental, perhaps to receive the three stooges referred to in my latest posting.

He is a great leader. We should use his method of leadership as our model here. We would have less hassle with the opposition.

Thanks for being a fan. I hope you will continue to enjoy my neat shots.

Salam, where u get those pictures above? I need the original version for my publications, pls, thank you so much.

They are from my private collection left to me by my late father. Which publications do you speak of if I may be so inquisitive?

The one who is standing first from the left is my tok waaaan. Miss him so dearly. Al faatihah