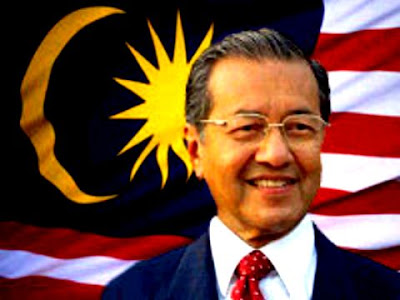 WITH RIZ KHAN ON ALJAZEERA.

I’m not relaying the whole of yesterday’s interview in this posting, but only the message that I thought Tun was sending to us in his classic fashion

“ There is no Ketuanan Melayu because the Malays are the underdog. I keep on telling the Malays that if you are a driver or a shoe-polisher, you are not the Tuan. The man paying you is the Tuan. So if the Malays want to be a Tuan, they have to be successful, be wealthy, own Rolls Royces and then the driver will call him Tuan. I had a Chinese driver once and he called me Tuan. “

Good Heavens Tun! God forbid, you might be hauled up for SEDITION for saying the last sentence! After all, they are the “Untouchables”.

Is there anybody among the UMNO second liners who calls anyone Tuan outside of the Party? If there is none (yeah right!), then please behave like we expect you to in the name of Islam, the Malays and the Country.
DEFEND IT OR BE DAMNED!
Posted by TPJ at 3:59 AM

Come to think of it,we should taget or more than 30%..Why not go for a higher number?

I think he meant 'tuan' in the literal sense, when we are looking at the 'ketuanan melayu' in a wider scope.

Dun blame him. Age is catchin up!

Tun usually has a hidden meaning when he says something.

He was provoking the Malays to do better in life and poking fun at the rest for not knowing their place in the landscape of this country.

Knowing Tun the chinese driver may call him Tuan but the rest like the wannabe chinese towkays, wannabe indian businessmen, and malay wannabe billionaires call him 'Sir' not Tuan, not Datuk Seri...A taste of British liking may i say! And yet when he came to power buy British last!

Greetings and welcome to the blog.

If my memory serves me right, someone very close to the Tun related the reason for him to treat the British in that manner.

When Tun Razak, while holding the office of Prime Minister died in Britain, there was not one British official at the airport to see the remains back to Kuala Lumpur.

This showed the British's disrespect for not only our Prime Minister then, but also for the country they once ruled over.

They needed to be taught a lesson, but Tun had to wait until he became PM to grant them that "courtesy". When Tun declared "Buy British Last", the British High Commisioner went to see him and was made to wait for hours to no avail.

Then Thatcher made much sincere effort to cement the crack by which time damage had already been done to their economy because we were looking east, and so were sonme others who were by a small measure influenced by the great Tun.

This act by Tun showed his deep respect for Tun Razak and disgust with the way the "Mat Sallehs" were treating people of "the orient."

It worked and due respect was given to this country beginning then.

Knowing the delegates and their voting culture from my experience, "Yang paling layak" doesn't necessary mean he "akan di pilih".

I don't know about the coming members but the current ones are as you rightly pointed out, "Baduts" and "Patungs". It had to take us to do their jobs for them, ie do the right thing for UMNO while they sucked up tpo the Prez.

After this, when Pak Lah no longer sits there, watch out for these same baduts whack him without mercy.

I beg to differ to your comment on Mahathir's treatment of the Brits. His treatment of the Brits is due to the ff:
1. He did not get a scholarship from the British to study in U.K. which was the in thing for bright students than with the exception of the royalties ofcourse. Instead he got to go to S'pore to do medicine. He felt discriminated because the scholarship to U.K. was for the Malays, those days the term bumiputra was not coined yet! This made him upset.
2. By buying 'British last' he made sure that all the businessmen holding agencies for the British companies kowtow to him and not to Razaleigh and the former administration of Hussein Onn
3. Try recalling the time when he lifted the 'embargo', who was the biggest beneficiary...remember Arumugum. The government made a huge arms deal with the Brits through this guy. Another notable figure then was Ananda.
Since you were young than perhaps you can ask your elders in the party circles.
4. And whilst 'looking east' who do you think benefited?

If anyone would be upset with the the Brits for not being courteous with Razak's demise in London it would be Hussein Onn, not only did he succeed as prime minister but more importantly he was the brother in law of Razak. Mahathir may have many reasons for imposing 'British last' but certainly one of them was not because of their treatment to Razak.

I am not privy to items 1-4 but I'll give you the benefit of the doubt.

While I'll take your version in I'll also take mine to be authentic as it was related to me by one of his closest confidant and was attested to by two different parties from those days. Furthermore I'm quite satisfied with it in addition to yours.

Hussein Onn didn't know diddly squad. He was a weak leader not unlike the current one and served almost the same length of time as the latter will have by March
2009. Hussein Onn, despite being related by marriage to Razak, didn't have the courage to stand up against the Brits, unlike Mahathir. His leadership qualities reflects very well with his son, the Vice Presidential candidate which is nothing much to shout about.

As far as beneficiaries to govt policies are concerned, which leader doesn't have one?

We opted for a well known God fearing Mr Clean and where did that get us?

I thank you for the added information nonetheless. There is much you can tell us on the past and we value it.

Al-Fatihah for Tun Razak and Tun Hussein. May their souls rest in peace.

Najib have no balls.

This is what feudelism culture applied into democrasy produce: Weak off spring!

Hope Mukhriz is an exception. He has potential.

I'm disgusted with the people who
whenever they call malay of being racist and reject the idea of malay supremacy they end up exposing the racism in themselves..

I feel ashamed especially to my mother when watching the news or reading daily newspaper,there are so many stories,comments about non malay leaders from BN and PR thrashing UMNO and the Malays in general.They don't attack the Malays directly as general but paint the bad image solely on UMNO although their target is the whole Malays poplation(as if we didn'tknow).

I would like also for the government to set-up a badan pemantauan especially on the chinese newspaper and chatroom where there are worryig trends to portrait hatred again UMNO and the Malays...

That is the responsibility of the Home Ministry. There should be a section that reads all the dailies of all languages.

The problem is, they probably couldn't find a Malay who can read the Sin Chew and the rest. The Chinese translater wouldn't devulge the real deal because their struggle is stronger for their race than the Malays for ours.

Sadly, it is proven that the Malays would sell their soul for money and power. They have no qualms about snitching on each other which you wouldn't see in the Chinese.

I have suggested this to the Minister. We should go with the Singapore way of dealing with extreme bloggers. It's best not to detain a recalcitrant blogger or journalist at all than to detain him for a month only for him to come out being treated like a living martyr by the public.

We have to make sure that if we have to we send them in, when they come out, they are rehabilitated, not get worse making us look silly.

Hussein Onn may have been weak, but he had a strong, no nonsense Home Minister. The ISA "resort" was full then.

As far as his son goes, I don't want to waste my breath.

Sometimes looks and appearance can deceive people. Some people can look tough and have a 7 dan black belt but in reality is a wimp.

Mukhriz looks timid but his struggle for the Malays is incomparable. This is where he saparates himself from the current Youth Chief and the other wannabes.

Mahathirrism is our ethic code....we will prevailed in this battle to defend malay soverignty.Who dare to challenge "ketuanan melayu" will end their life on wheel chair just like karpal singh.....Allah Maha Besar