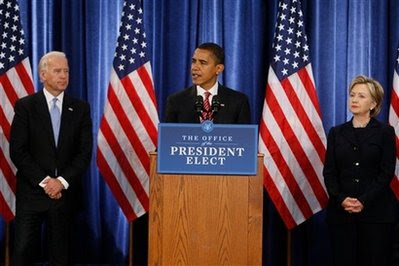 HILLARY RODHAM CLINTON TO BE MADE SECRETARY OF STATE.

President-elect Barrack Obama today announced a powerful team to join his Cabinet today after he takes his Oath of Office as the 44th President of the United Sates of America scheduled for the 20th January 2009.

Senator Clinton was Obama’s former campaign rival before having to concede after a tough 18 months of campaigning for the Democratic Presidential Nomination. She will have to surrender her seat as the Senator from New York to join the Cabinet. Her husband, former President Bill Clinton had to agree with several decisions before Hillary could be nominated by the President-Elect as Secretary of State, two of which were to submit his speaking schedule to review by the State Department and Whitehouse Counsel and refuse donations from foreign governments to the Clinton Global Initiative, his annual charitable conference.

Robert Gates is the current Secretary of Defense under Bush and will continue in that portfolio through the next Administration. Gates' appointment fulfilled a campaign promise by Obama, to name a Republican to his Cabinet.

Retired Marines General James Jones was a platoon commander in Vietnam, then became Commandant of the Marine Corps and later served as Supreme Allied Commander of NATO.

Eric Holder was Deputy Attorney General in the Clinton administration and was United States Attorney for the District of Columbia.

Governor Janet Napolitano is a former Federal Prosecutor, State Attorney General and was elected twice as Governor of Arizona. She is one of the early supporters of Obama. Like Clinton, she too will have to resign from her current position to join the cabinet.

Susan Rice served on the National Security Council and was the Assistant Secretary of State for African Affairs under President Bill Clinton. She was a senior foreign policy advisor in the Obama campaign for President.

Senator Clinton, Eric Holder, Governor Napolitano and Susan Rice will require confirmation by the Senate. General James Jones will not require a confirmation by the Senate because his appointment is as a White House official. Robert Gates is already confirmed to his post by the Senate by virtue of his current appointment as Secretary of Defense under President Bush and will not have to go through the process again.
Despite these announcements, the Dow Jones industrials plunged 679.95 points, or 7.70 percent, to close at 8,149.09 today. Perhaps it was due to the statement by the National Bureau of Economic Research that the country is officially in recession.
http://www.dailypress.com/news/sns-ap-recession,0,6802955.story?track=rss
President-elect Barrack Obama has his work cut out for him once he takes over the reigns. The Patriot wishes him all the very best.

Dear Patriot,
Remember what i said about 'outmanoevering'competition?

Now you see how it is used
in KT by election? 'Hudud' outhudud
BN.

It's a long way down to resume our discussion. Perhaps you're avoiding our other participants ey?

Anyway, BN shoukdn't be in the business of outmanoevering the opposition. They should just tell it like it is.

Kelantan has been under PAS for ages and if they were dead serious to implement the hudud, they could have started long ago in Kelantan because that's where it can sell.

The rakyat needs to be told the truth. If they prefer to believe in lies then they don't deserve good leadership.

Hudud won't fly nationwide because BN and some of the opposition parties won't have it. Plain and simple. No colouring or sugar coating needed.

If the BN campaigners can yap along those lines, the voters in KT will agree. They may be simple minded but they can think rationally if you give it to them straight up.