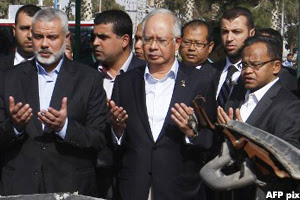 Caliph Of The Modern Era, Insh'Allah

While I’m abroad and feeling pissed off with the way things are being handled as regards to our religion at home, I’m also told of the reception to welcome the Prime Minister from his historic visit to Palestine, namely Gaza. I will be missing this proud moment receiving our Prime Minister, who is the only non-Arab Muslim leader to have visited Gaza to date.

While Prime Minister Najib Razak is striving to show the world of Malaysia’s support for our oppressed Muslim brothers in that region, the Ministers entrusted to defend Islam on our shores are pushing envelopes and pretending that it is not within their job scope to uphold Islam as enshrined in the Constitution of Malaysia and maintain national security and social order at the same time.  Evidence:

I’ll come out and say it straight up and concisely. I hold three Ministers responsible directly. They are the Home Minister Hishammuddin Hussein, (UMNO Vice President whom I rightfully did not vote for). Minister of Information, Multimedia and Communications Rais Yatim,  and Minister in charge of Islamic Affairs Jamil Khir Baharom.

The Minister in charge of Home Affairs and Internal Security has not been stern enough in his actions to prevent blood from spilling onto the streets except by issuing warnings upon warning, which go unheeded by the perpetrators. In the end, when frustrated Muslims take the law into their own hands, that’s probably when he wants to starts earning his keep.  That will be too little, too late. A weak hand should have no place heading National Security. Perhaps the Ministry of Women’s Affairs would be more appropriate.

Though the Minister in charge of Multimedia has made an effort to take action, it’s just in a form of an announcement without follow-up. It’s been more than two weeks since the Quran was spoken in vain by a non-Muslim. He’s still enjoying his liberties probably gloating somewhere until he is spotted by a true Muslim who is fed up with the delay in the bureaucratic system.

The Minister in charge of Islamic Affairs should register his strongest objection and uphold the sanctity of Islam in its truest form as enshrined in our Constitution. He should not just behave like a mere translator for the Prime Minister whenever he visits the States in all Arabia, be Imam and Preacher during UMNO prayer sessions, or check on how pilgrims fair during the Haj and Ramadhan seasons in Mecca like a GM of Tabung Haji. He doesn’t have to be a Minister to be doing all that. In short, he should be bothered more about how Islam is being treated at home than to coattail the PM in putting Malaysia as the Muslim leader of the world in the eyes of the West.

These three Ministers should be sitting in frequent meetings together to solve the issues bringing in the Attorney General and the Inspector General of Police. Instead, everyone is doing their own thing like they don’t belong to one party nor serve one religion. The presence of the Minister in charge of Law, though required is not essential, for his attendance would be deemed redundant with the Home Minister and the Attorney General there to share sufficient council for a decision. Besides, his judgment to give a “red carpet” in Parliament to a known traitor in the past shows that he is not suited to deal with issues of this nature. Best he is kept where he knows what he is doing.

In Essence, These Cowards Should Be Barred From The Welcoming Reception And Ashamed To Share The Glory Of Prime Minister Najib When He Returns At The Bungaraya Later On The 27th Of January. They Should Not Bask In Najib’s Exceptional Effort To Lead The Muslim World On Malaysia’s Behalf While They Fail Miserably At Their Jobs To Take Care Of Islam Domestically.

May Allah Fail Those Who Fail His Religion Without Penalizing The Ones from The Same Group Who Are More Righteous, Fearless And Sincere.