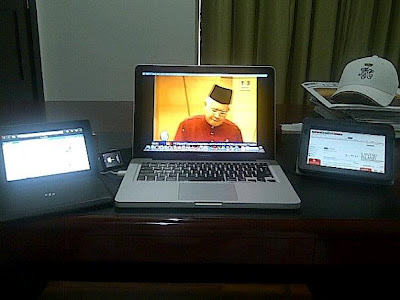 Get Your Gadgets Ready And Stay Tuned To The Hardest Working Politician In Asia To See What The Government Has In Store For Us This Afternoon.

Many would say this is an 'election' budget, as there are seven months to go before the 12th Parliament is automatically dissolved on April 28  2013, with the 13th General Election to be held latest by middle of May next year.

I personally would like to see a "responsible" budget of the Barisan Nasional government; one that is balanced between taking care of the needs of the rakyat and managing the deficit.

As in past practices, Dato' Sri Najib would table the Budget in Parliament at about 4pm.

He would time the delivery of his speech accordingly; announcing the Budget proposals after the stock market closes at 5pm.

What can we expect from the 2013 Budget?

To the uninitiated, Wikipedia explains the budget as such:

"The two basic elements of any budget are the revenues and expenses. In the case of the government, revenues are derived primarily from taxes. "Government expenses include spending on current goods and services, which economists call government consumption; government investment expenditures such as infrastructure investment or research expenditure; and transfer payments like unemployment or retirement benefits."

National budgets, too, have an economic, political and technical basis.

"Unlike a pure economic budget, they are not entirely designed to allocate scarce resources for the best economic use. They also have a political basis wherein different interests push and pull in an attempt to obtain benefits and avoid burdens. The technical element is the forecast of the likely levels of revenues and expenses."

Prime Minister Najib, his deputy Tan Sri Muhyiddin Yassin and several ministers had in the past few weeks gave indications as to the contents of 2013 Budget.

The thrust, of course, will be the rakyat while at the same time, be fiscally responsible.

The touch points could be those under the Government Transformation Programme's national key result areas such as:

1) Education: more money to realise the Malaysia Education Blueprint especially for the training of teachers and improving the facilities in public schools?

2) Public transportation: Addressing the accessibility in major towns outside Kuala Lumpur and those in Sabah and Sarawak?

3) Crime: Better salary and benefits for the police to increase number in workforce?

5) Housing: more money for low- cost housing programmes for the lower income group, and PR1MA scheme for the middle income earners, which the Prime Minister is expected to launch at the Jelajah Janji di Tepati in Paroi, Negeri Sembilan tomorrow?

On the investment front, I foresee the government's focus could possibly be oil and gas, especially as it is turning Pengerang in Johor into a regional supply base to the region and countries throughout Asia.

There could also possibly be announcements on incentives for specific sectors including the small and medium-sized enterprises, which remain one of the main drivers of economic growth.

We can also expect some announcements relating to the capital and financial markets.

As for the public sctor, Chief Secretary to the Government Datuk Seri Ali Hamsa said there would be something also for the civil servants in the 2013 Budget. Are they getting yet another bonus as in past Budget announcements?

We will have to listen to Dato' Sri Najib's speech later.

And what if this is indeed an “Election" Budget, dubbed such yet again for the fourth straight year?

Evidently, the Barisan Nasional government must have done a fine job at maintaining the nation's stocks and accounts.

Backed By Their Balanced Judgment And Sound Economic Acumen, It Should Then Be Given The Full Mandate To Continue Governing This Country At The 13th General Election.