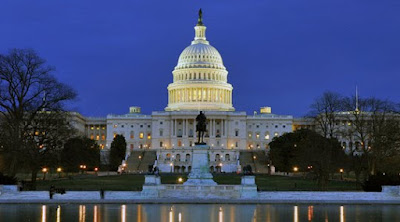 The Centre of Strategic & International Studies (CSIS) held a seminar in Washington D.C. on the Governance & Rule of Law in Malaysia recently, attended by Minister Nazri Aziz and Ambassador Jamaluddin Jarjis (a.k.a. J.J.) put together by the CSIS’ Head of Southeast Asian program, Ernest Bower.
Malaysia Today reported that all the while Nazri was giving his address, Ambassador Jarjis was either fidgeting with his Blackberry or reading the Washingtion Post. Well naturally, keeping awake while deliberating on a topic of this nature, especially when the presenter is not very eloquent and savvy in his delivery, is usually an uphill battle unless it’s spruced up with showgirls from Vegas. But we should stick to the facts to find the distinction, not be distracted with sideshows and lose sight of the purpose of the program.
Pats on the back should be given to Nazri and JJ for having the courage to open the floor for questions after the briefing and bringing it on smack in the heart of Washington, knowing there were hostile agents planted in the midst. Among others, a participant from Amnesty International reportedly likened Malaysia to Myanmar in reference to Anwar’s ongoing case. He might as well have introduced himself as a representative from Travesty International instead for being unable to distinguish between an extremely deprived and jailed Aung San Suu Kyi and the gallivanting, high flying, rich and free to slander the government at will Anwar. He implied that the US will never improve relationship with Malaysia as people in Washington have concerns over Malaysia’s treatment of the opposition and Anwar’s trial.
Ultimately, an employee’s backside has been allegedly violated by his employer, either by undue influence, duress, or even with consent at first but involuntary after that. Any of these possibilities could have come into play and the person at the “ receiving end “ decided to lodge a report when he came to his senses. If the rule of law is anything to go by, then every “ backside ” should have its day in court. While the United States of America will continue to champion human rights and everything under the sun that they think can benefit them, I don’t think they will sour relations and risk a trade surplus with Malaysia on the account of one randy-for-the-wrong-end-wrong-sex, washed-up politician.
There was promise in Ambassador Jarjis that he is the right man to bring the battle with Anwar to the source of his so called strength in Washington. We are beginning to see some light of this at the end of the tunnel leading to the White House. Anwar’s lying nicely in the casket wearing his favourite black Zegna suit, so to speak. The show’s almost over. It’s time for JJ to nail his coffin and shove it into the furnace!
Posted by TPJ at 1:54 AM

Great piece of writing, full of imagery. I especially like the funeral theme.

May your wish for JJ to finalise the pest materialise indeed, Insyallah.

Why send Nazri??
He's pathetic and a disgrace to UMNO and BN
Never like and never will like him

Anonymous 2:15
Thank you for the kind words. Yes it looks like JJ is doing a fine job. So far though he needs to polish up on his antics and sideshows distracting the main event. Having said that, he is performing much better than any of his predecessors barring the late Zain Azraai.Prime Minister Najib made an immaculate executive decision in putting a current politician as the head of our mission there.We need to correct the wrong perception on our country's record and we cannot do that by putting a passive and half dead diplomat to mingle among the hyenas. We need a wolf to shock them with and JJ's our beast!

I think this arrangement was.made between JJ and Nazri in his capacity as the defacto Law Minister. He seems to have a loud mouth that can do some harm. We might as well use that to our favour there to do some damage on our nemesis.On the other hand, if it backfires, we can always blame him for his idiocity.